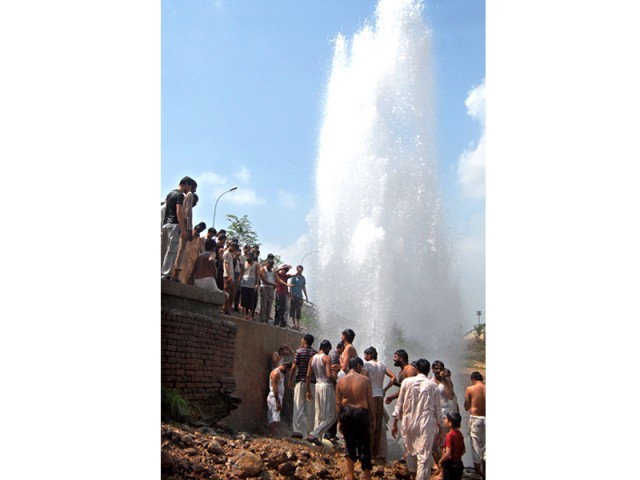 Water gushes from a damaged water line as a crowd gathers. PHOTO: EXPRESS/FILE

The city could not receive around 10 million gallons of water due to the fault. According to the Karachi Water and Sewerage Board’s (KWSB) officials, the pipeline burst due to a sudden power breakdown by K-Electric. They explained that the pipeline was being repaired and it could take 24 hours to restore water supply to the city from the pipeline.

A KWSB spokesperson said repair work was being carried out on an emergency basis and water was being supplied to Karachi through an alternative pipeline. The spokesperson maintained that excessive machinery and staff had been dispatched to the site to accelerate the repair work.

The power breakdown occurred at around 5am in the morning. It reportedly caused a back pressure, resulting in the rupture. The power cut also affected the Gharo and Pipri pumping stations, causing less supply of water to the city.

Upon receiving the information, a team of engineers and other KWSB officials rushed to the site with required machinery and began repair work. As power was restored around 8:15am, the water board resumed water supply to the city through substitute pipelines. The repair work is expected to be completed by 9am on Saturday.