Sindh receiv­es 69.5% less than normal rainfa­ll from May to August this year
By Sehrish Wasif
Published: September 7, 2018
Tweet Email 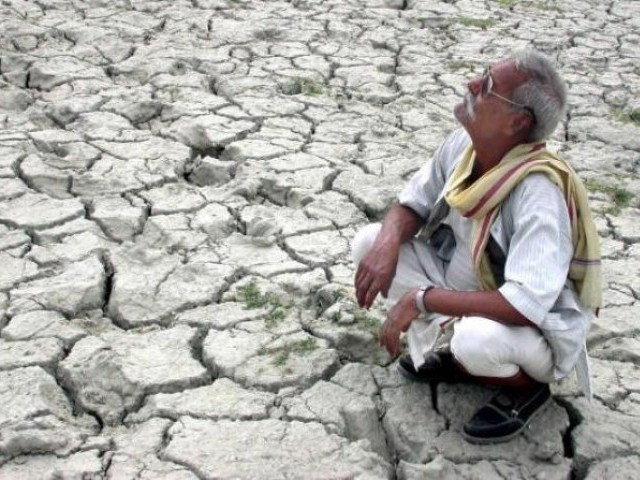 Sindh receives 69.5% less than normal rainfall from May to August this year. PHOTO: AFP/FILE

ISLAMABAD: The prevailing drought-like situation is likely to worsen in coming days mainly due to insufficient rainfall during summer and monsoon season in lower parts of the country.

The Pakistan Meteorological Department (PMD) issued on Friday the second drought alert for the year, and advised all the stakeholders to be ready to handle the situation as it is expected that dry conditions will cause water stress in the cultivated areas of the country due to limited supply of irrigation water for Kharif crops.

“Due to less water in Mangla reservoir and minimal expected rainfall during the next three months, farmers are likely to face water shortage for sowing Rabi crops,” warned the Met office.

Overall, Pakistan has received -24.4% below average rainfall from May to August this year while among provinces, Sindh has received the most insufficient rainfall during this period which is -69.5% followed by -49% in Khyber-Pakhtunkhwa and -45% in Balochistan.

This is the second time that the Met Office has issued a drought alert this year, earlier the first drought alert was issued in June as a result of insufficient rainfalls across the country from January to May.

Dalbandin, Gwadar, Jiwani, Panjgur, Pasni, Nok Kundi, Ormara, Quetta and Turbat are among the areas affected by the drought. Meanwhile, mild to moderate drought is prevailing at few places of southern Punjab including Multan and Mianwali and Bunji, Chilas, Gilgit and Gupis in Gilgit-Baltistan.

On the other hand, the water availability in Terbela Dam is at maximum level. However, Mangla dam is almost half-filled to the maximum conservation level (almost 65 feet) at Mangla reservoir. Small dams situated near Islamabad and groundwater conditions have been significantly improved at most places of Islamabad and Rawalpindi.

Speaking to The Express Tribune, Met Office spokesperson Khalid Malik said that such severity of the situation has arisen in Pakistan after a lapse of three to four years.

“It is expected that in coming years the situation instead of improving will be worsening more in the country mainly under the impact of climate change,” he said, adding that current monsoon rain is 32 per cent below average across the country. In September, the amount of rainfall is further likely to be dropped across the country.

Malik said that for the last three to four year the percentage of monsoon rains in the country is dropping and Pakistan is receiving below average rains every year.

During last summer and winter, Pakistan had received below normal rainfall while the situation has further aggravated this year, he said.