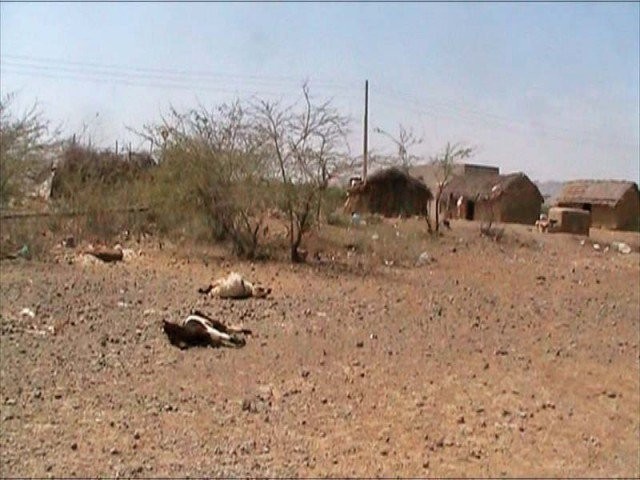 Major reason behind this seasonal drought is low snow melting and insufficient rainfall in the country during winter season and start of summers PHOTO: EXPRESS

ISLAMABAD .: The Pakistan Meteorological Department (PMD) on Wednesday issued a drought alert as a result of insufficient rainfalls across the country from January to May this year.

While considering the worrisome and alarming situation, the Met office has advised all the relevant authorities/departments for an immediate water management strategy to avoid negative impacts of deficit rainfall on water and agriculture sector.

The advisory has warned that small dams situated near Islamabad are at critical level and groundwater boring wells have become dry up to the depth of 150 feet in most areas of the twin cities.

According to the National Drought Monitoring Centre of PMD, drought-like conditions have emerged over most parts of the country. Meanwhile moderate to severe drought has been prevailing in lower Khyber-Pakhtunkhwa (K-P), barani areas of Punjab, South Punjab, Southwest Balochistan and Southeast Sindh.

“Dry condition was observed in southern parts of the country during the last five months. The dry condition has caused water stress in the agriculture areas of the country that demands availability of more supplementary irrigation water for Kharif Crops,” reads the alert message.

Water availability in major reservoirs is low; however, water situation in the major dams will improve with the increase in temperature.

Met office officials said that as predicted during the five months of this year, below normal rainfall was recorded in most parts of the country.

“The winter season, which is from January to March received -62 per cent well below rainfall whereas in April and May, it was -9.9 per cent near normal and in January to May as a whole it was -44% below normal rainfall over Pakistan,” reads the alert.

A senior meteorologist at PMD told The Express Tribune that “It is a seasonal drought which has occurred after five to seven years in Pakistan.”

He stressed that the major reason behind this seasonal drought is low snow melting and insufficient rainfall in the country during winter season and start of summers.

“Besides that the drought is expected to come to an end as soon as Pakistan will receive good amount of rainfall,” he added.

Earlier according to Indus River System Authority (IRSA) the two major dams of the country had reached a historical dead level thrice in a period of just two months.