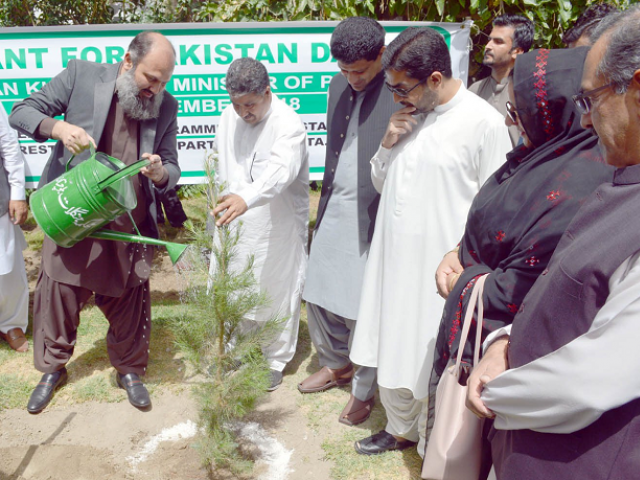 QUETTA: Balochistan Chief Minister Jam Kamal Khan on Sunday kicked off the Plant for Pakistan drive in the province by planting a sapling at the CM Secretariat.

The Balochistan government has announced it will launch the programme by planting 11,000 trees in the province while the Forest Department has already issued a notification in this regard.

“Following the Plant for Pakistan campaign, the provincial government will plant 95,000 saplings across Balochistan and the Forest Department has been directed to make arrangements for nourishing the plants,” said the chief minister while addressing the media at the CM Secretariat.

Kamal said, “Without taking care of the plants our campaign will be useless. During the Plant for Pakistan drive, at least 6,000 new trees will be planted in all districts of the province.

“We have been strictly adhering to our policy of providing adequate relief to the people of Balochistan. We will show ground performance within the next three months and strengthen the trust of the people of the province in us.”

To a query regarding Public Sector Development Programme (PSDP) funds, the chief minister said, “Acting on the court’s decision, the provincial government has decided to pull out unprocessed and unnecessary development schemes from the PSDP funded projects.

“We are going to review the development schemes lasting for the last 10 years. Some of them are about to be completed, while some are half completed,” said Kamal, adding that the new schemes would be included after completion of previous ones.

Sharing the details of the Plant for Pakistan drive, Kamal said, “The provincial government has requested all heads of educational institutions to participate in the campaign.

“Nothing can happen by planting just one tree, we have to expand the campaign on a wider level and solar tube wells will be beneficial in providing water to the newly-planted trees.”