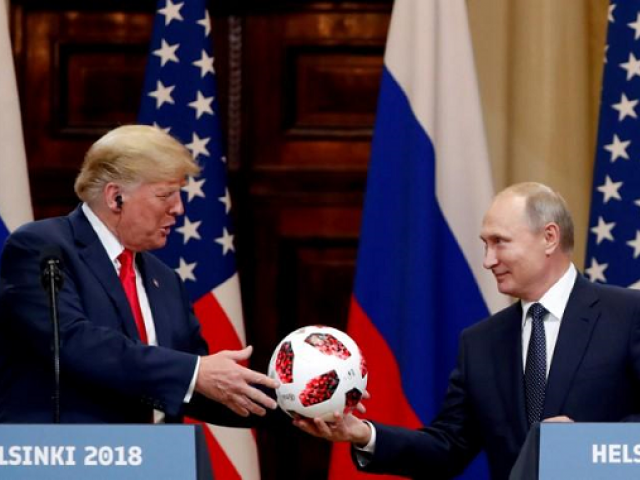 US President Donald Trump receives a football from Russian President Vladimir Putin as they hold a joint news conference after their meeting in Helsinki, Finland July 16, 2018. PHOTO: REUTERS

President Donald Trump and US Attorney General Jeff Sessions both supported a proposal during the 2016 campaign that Trump meet with Russian President Vladimir Putin, lawyers for a former campaign adviser said in a court filing late on Friday.

Trump threatens to withdraw US from World Trade Organisation

The account of the former adviser, George Papadopoulos, appeared to contradict the testimony of Sessions to Congress in November 2017 that he had “pushed back” against the proposal by Papadopoulos at a March 31, 2016, campaign meeting.

Trump has said he does not remember much of what happened at the “very unimportant” campaign meeting memorialized in a photo that Trump posted on Instagram of roughly a dozen men sitting around a table, including Trump, Sessions and Papadopoulos.

“While some in the room rebuffed George’s offer, Mr Trump nodded with approval and deferred to Mr Sessions who appeared to like the idea and stated that the campaign should look into it,” Papadopoulos’ lawyers wrote in the court filing, which argued for leniency ahead of a sentencing hearing next week.

Papadopoulos, who pleaded guilty in October to lying to the FBI about his Russia contacts, has been cooperating with Special Counsel Robert Mueller’s probe into Russian meddling in the 2016 US election and possible collusion with the Trump campaign.

Friday’s court filing confirmed reporting by Reuters in March about the apparent difference between Sessions’ testimony and how others recounted his reaction to the proposal at the March 2016 meeting.

“Attorney General Sessions has publicly testified under oath about his recollection of this meeting, and he stands by his testimony,” Washington lawyer Charles Cooper, who represents Sessions, said in an email to Reuters.

Outside lawyers for Trump did not immediately respond to requests for comment.