US, Mexico moving to sign FTA, with Canada not behind

US, Mexico moving to sign FTA, with Canada not behind 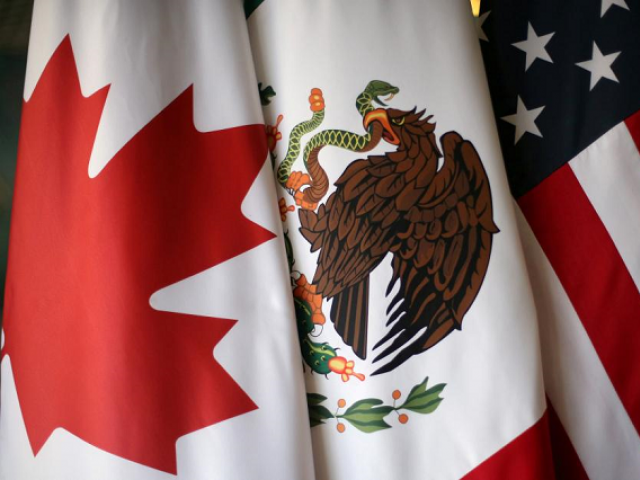 But the official said Washington could go ahead with just Mexico if Canada decides not to sign on to the near trade deal. PHOTO:REUTERS

WASHINGTON: The United States is pressing ahead with a free trade pact with Mexico, but whether Canada will join depends on a new round of talks next week, after negotiations ended on Friday without an agreement.

Officials had appeared to be on track to reach a deal that would rewrite the North American Free Trade Agreement (Nafta), but in a bizarre twist, inflammatory comments from President Donald Trump angered Canadian officials and threatened to upend the talks.

The US and Mexico announced a breakthrough accord on Monday, potentially leaving Canada out in the cold if no deal is reached, but Ottawa’s foreign minister insisted that a “win-win-win” agreement is within reach.

US and Canadian officials said talks will resume on Wednesday, but the White House already notified Congress on Friday of its “intent to sign a trade agreement with Mexico – and Canada, if it is willing – 90 days from now. “The White House now has 30 days before it must present the full text of the new agreement to Congress, which will give Ottawa and Washington time to iron out remaining differences.”

“We know that a win-win-win agreement is within reach,” Canadian Foreign Minister Chrystia Freeland told reporters after a week of talks to rewrite the 25-year-old Nafta. “With good will and flexibility on all sides, I know we can get there.”

However, she repeated that Canada will only sign an agreement that is in its national interest. “We’ll keep talking until we reach a good deal,” Freeland said.

US Trade Representative Robert Lighthizer said the negotiations over the past four days were “constructive, and we made progress”.

“Our officials are continuing to work towards an agreement. The USTR team will meet with Minister Freeland and her colleagues on Wednesday of next week,” he said in a statement.

Lighthizer stressed that the new agreement will have “huge benefits for our workers, farmers, ranchers and businesses.”

After the US and Mexico reached an agreement on new rules for auto trade and tougher protections for workers and intellectual property, talks with Canada were hung up on the mechanisms used to resolve disputes among partners and on Ottawa’s strictly controlled dairy sector.

“I think all three countries have worked together very productively and we’re getting more and more excited about the results,” a senior US official told reporters.

But the official said Washington could go ahead with just Mexico if Canada decides not to sign on to the near trade deal.