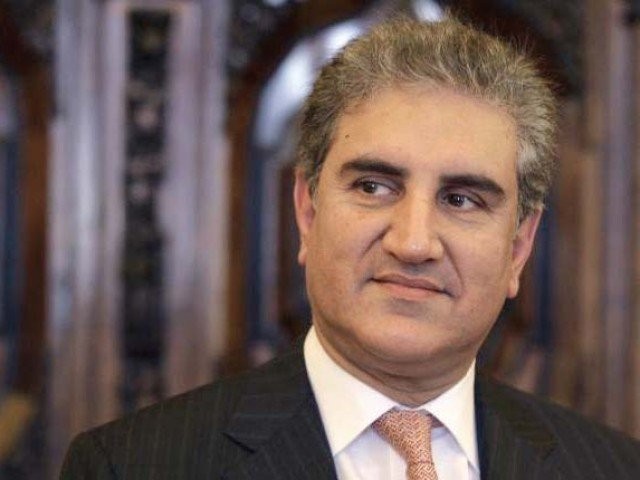 ISLAMABAD: Foreign Minister Shah Mehmood Qureshi termed the cancellation of a blasphemous caricatures contest in the Netherlands a “great moral victory for the Muslim Ummah”.

Addressing a press conference early on Friday morning with Tehreek-e-Labbaik Pakistan’s (TLP) Pir Afzal Qadri, the foreign minister added that the issue was immediately raised at all forums by the Pakistan Tehreek-e-Insaf-led government and a “major crisis” was averted.

The leader of far-right Party of Freedom, Geert Wilders, had earlier organised the competition. The Dutch politician has lived under round-the-clock protection for years due to death threats sparked by his anti-Islam rhetoric.

Elaborating on steps taken by the government, Qureshi said the Parliament had earlier passed a unanimous resolution denouncing the blasphemous contest in “strongest terms” and minority members of the legislature were at the forefront in condemning the act.

The foreign minister added the government had also conveyed its sentiments to the Dutch government, which went to great lengths to distance itself from the contest arranged by Wilders. Qureshi also recalled his contact with his Dutch counterpart, who was conveyed that Wilders act should not be allowed to hurt the sentiments of billions of Muslims across the globe.

Wilders on Thursday said he has decided to cancel the controversial blasphemous caricatures contest after being at the receiving end of death threats.

In a statement, Wilders said he has decided “not to let the cartoon contest go ahead.”

“The threats resulting from the cartoon contest are running out of control,” he added.

The leader of far-right Party of Freedom, in the past, has also called for mosques and Islamic schools to be shut down and for a blanket ban on Muslim immigrants.

The TLP had called for the expulsion of the Dutch ambassador as it launched a protest against the cartoon competition on Wednesday.

Hundreds of demonstrators left Lahore and had been on the move until Wilders’ announcement.

Earlier, Prime Minister Imran Khan, in a video message, said the government would raise the issue at all international forums.

The prime minister said the issue of blasphemy was troubling for every Muslim.

He said the Muslim world would vehemently raise the sensitive issue at the United Nations from the platform of Organisation of Islamic Cooperation.

One martyred as Navy helicopter crashes in Arabian Sea