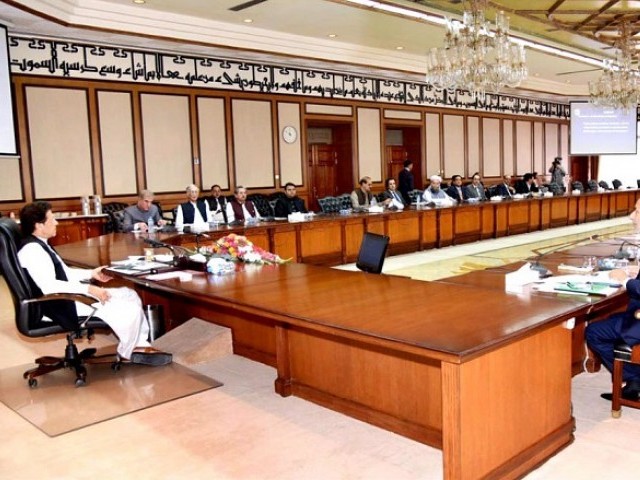 ISLAMABAD: In its maiden meeting, the newly appointed federal cabinet on Monday decided to place names of former premier Nawaz Sharif and his daughter on the no-fly list as it announced to expedite the repatriation of ‘absconding criminals’ including Sharif’s sons and former finance minister Ishaq Dar.

The three-point agenda of the cabinet meeting, chaired by Prime Minister Imran Khan, was specific to accountability and austerity. The 16-member cabinet that was sworn in earlier in a ceremony at the Presidency will meet again on Friday (August 24).

“One must not have any doubt about incumbent government’s commitment to accountability and eradication of corruption,” Minister of Information Fawad Chaudhry said while briefing media about the cabinet meeting later.

At the helm: Imran Khan sworn in as prime minister

He said the National Accountability Bureau (NAB) had been requesting the federal government to approve placement of Sharif family members’ names on the Exit Control List (ECL). However, the outgoing interim government had put off this matter, leaving it for the next government.

“The cabinet has decided to place names of former PM Nawaz Sharif and his daughter Maryam Nawaz on country’s no-fly list,” Chaudhry said. “It has also been decided that absconding criminals including Sharif’s sons – Hassan and Hussain – and former finance minister Ishaq Dar should be brought back to Pakistan so that they could face pending cases against them.”

He said red warrants have already been issued for the three accused. “Today, interior and law ministries have been directed to ensure implementation of these warrants,” Chaudhry said.

The minister said cabinet has decided that it would start accountability process from itself and for the purpose; all the cabinet members have been directed to submit afresh all the details of their assets.

Sharif, Maryam and her husband, Captain(retd) Safdar are currently serving jail terms after being convicted on July 6 by an accountability court in Avenfield reference, one of the four corruption cases filed against Sharifs and former finance minister Ishaq Dar in line with apex court’s July 28, 2017 verdict.

He said Khan has restricted his cabinet members to not avail any holiday (not even on Sundays) in next three months. The premier has also advised his ministers to work at least 14 hours a day, saying he would himself give 16 hours a day to his office after Eid holidays.

The cabinet also approved the formation of a task force headed by Special Assistant to PM on Accountability Shahzad Akbar. It has been tasked to formulate policies to bring back the looted public money stashed in foreign countries.

“To our understanding, Avenfield properties belong to the people of Pakistan. Cabinet has directed law minister to approach the British courts for the attachments of these properties so that it could be sold and the money be submitted to national kitty,” the information minister said.

He added the representatives of the Federal Investigation Agency, the National Accountability Bureau, the State Bank of Pakistan, the Federal Board of Revenue, the Security and Exchange Commission of Pakistan and law and foreign affairs ministries will be made members of this task force while other government departments will be entitled to assist it.

This task force would give a presentation soon to the PM and his cabinet about the assets piled up by individuals abroad through ill-gotten money in Pakistan. To question, Chaudhry said there was no discussion regarding former president Pervez Musharraf in the meeting.

According to Chaudhry, the government has also formally launched its austerity policy and for the purpose the cabinet on Monday took a couple of decisions ranging from withdrawal of state-funded overseas medical facility to ministers to auction of bulletproof and other luxurious vehicles of PM House and restriction on unnecessary foreign tours of the PM, ministers and bureaucrats.

“The cabinet has decided to immediately withdraw the facility of medical checkups of ministers in foreign countries on government expense,” Chaudhry said.

In line with an announcement made by Premier Khan in his maiden address to the nation on August 19, the cabinet also approved auctioning costly bulletproof vehicles meant for the PM and a committee headed by the secretary to the PM has been asked to finalise terms and conditions for that auction.

Khan had announced that out of 88 luxurious vehicles currently available for him he would only utilise two of it and auction the rest and submit the amount to the national kitty.

A 13-member panel headed by Heritage Minister Shafqat Mehmood and comprising experts in the fields of heritage, architect, visual arts and designing will decide the fate of spacious heritage buildings like governor houses and state guest houses across the country and suggest the best possible utility for them.

The committee headed by Asad Umar will chalk out a comprehensive plan for the utility of sizeable government accommodations used by commissioners, IGs and other top rank government officers.

“Government will not terminate services of hundreds of its employees performing duties at the PM House, governors’ houses, the CM Houses, and other such government buildings rather their services will be surrendered to other state departments,” he clarified.

“The PM has also directed to curtail the practice of frequent and unnecessary foreign visits of government ministers and top bureaucrats. The PM himself has no plan to visit any foreign country at least for the next three months unless deemed necessary,” Chaudhry said.

He said that instead of the premier, Foreign Minister Shah Mehmood Qureshi will attend the next month’s United Nations General Assembly session.

The cabinet also condemned the Dutch government’s move to allow a lawmaker to exhibit blasphemous caricatures. The minister said the Ambassador of Netherlands would be summoned to the foreign office to lodge a formal protest.