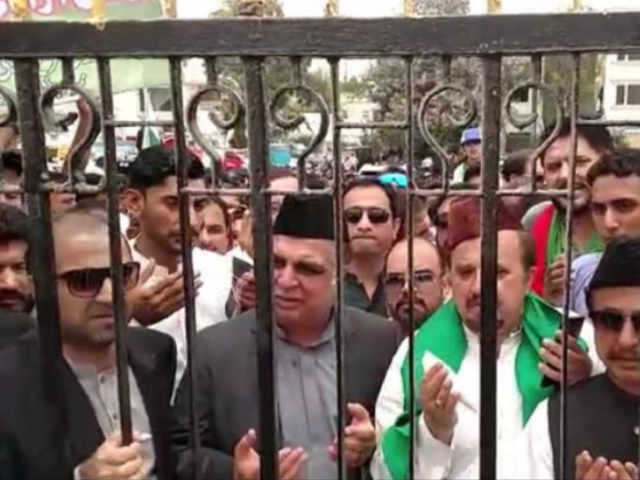 A photo posted by Imran Ismail showing his party outside the mausoleoum gates. PHOTO:Twitter@ImranIsmailPTI

Ismail told The Express Tribune he was denied entry into the complex for mooting the possibility of razing the outer wall of Bilawal House in Karachi.

Ismail proceeded to the site at 11:30am this morning with over a dozen Sindh MPAs to pay homage at the mausoleum in connection with Independence Day. Upon arrival, he was told to wait. Ismail said the delegation waited for over an hour and watched former Sindh CM Murad Ali Shah enter and leave the premises with a 300-individual entourage. He said he also Muttahida Qaumi Movement and Grand Democratic Alliance leaders pay homage while his party waited.

Earlier this week, the PPP took issue with Ismail’s statements on the PPP headquarters. He said encroachments around Bilawal house should be removed or he would look into the matter himself after taking charge as Sindh governor.

In response, the PPP questioned whether these sentiments were his own or PTI chairman Imran Khan’s. The party urged the PTI to review their choice for the gubernatorial position and threatened to protest if Ismail did not desist from targeting the PPP headquarters.