Open for the public from Sunday evenin­g.
By Naureen Aqueel
Published: May 29, 2011
Tweet Email 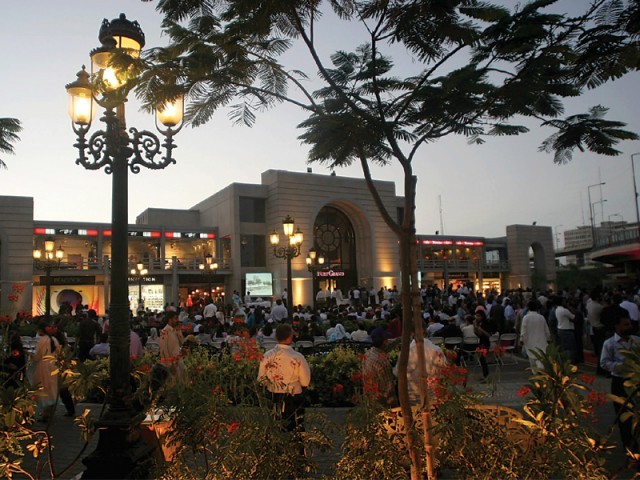 The Port Grand, a space for cultural activities aimed at promoting the city’s heritage, was inaugurated on Saturday. PHOTOS: ATHAR KHAN/EXPRESS

The whiff of putrid sea air that hits you as you near the entrance of the highly anticipated Port Grand Food and Entertainment Complex is forgotten once you step inside the metal gate. The newest addition to Karachi’s nightlife promises to offer visitors a world of its own in an enclosed area cut off from the craziness of city life.

“A lot of people thought this was going to be another Burns Road, but this is a different cup of tea all together,” said Managing Director Shahid Firoz of Grand Leisure Corporation. “We hope this project will lend a bit of positivism to this city and country.”

Port Grand formally opened on Saturday in a festive mood with Governor Dr Ishratul Ebad as the chief guest.

Port Grand expects to attract 4,000 to 5,000 people daily. Currently, 40 outlets are up and running and more are expected to open soon. The first thing you notice once inside is the shopping mall that houses a number of brands, including shops for gifts, clothes and accessories and books.

Towards the left of the mall was the much-talked about Napier’s Tavern. With its historic architecture and fine dining, the lodge is expected to serve as a setting for the city’s corporate crowd. The lodge was built right under a one-hundred-year-old banyan tree where Charles Napier is believed to have built a tavern. The builders used the same stones and wood extracted from the demolished bridge to salvage the heritage.

Further left, stretches the food enclave for a kilometre. Men, women and children were strolling about the concrete path along the 19th century Native Jetty bridge that connects the Karachi Port Trust to Keamari. Live cartoon characters were waiting to start their act to entertain the young visitors and loud music blared across the food street as organisers, waiters and construction workers added some of the finishing touches to the outlets and stalls — that offered a wide array from fast food and desi food to Thai cusine. Unfortunately, many of them were still being set up. The organisers announced that the complex would open for the public from Sunday evening.

The food enclave runs along the port where you can view the sea while sitting on green benches lined across the fresh green turf. The three spaced-apart metal barriers from the water could, however, be tempting for adventurous children. You can even see the cargo being loaded and unloaded from the ships that arrive from all over the world. The food street ends close to a point where you can see ships harboured at the KPT Boat Wharf.  The land for the project was leased by the KPT for 30 years on a Build Operate and Transfer (BOT) agreement. Work on the billion-rupee project started in 2005 and it was expected that it would be completed by 2009. However, Grand Leisure Corporation claimed that the delay was caused by the need to completely revamp the Native Jetty bridge which was in bad shape. This caused expenses to shoot up. “Better late than never,” said Firoz. “If we wish to do things the right way there might be a delay but the end product will be something positive.”

KPT has provided double fencing around the complex for security and privacy and KPT guards also patrol the bridge. Entry has been made secure and security personnel have been put in place from the PNC building. KPT Acting Chairman Iqbal Umer said that the corporation was providing for most of the security itself.

“We have provided state of the art security,” said Nazneed Shahid, Firoz’s daughter, who has been involved in the project. “The area is no more unsafe than any other place like Boat Basin, for instance.”

Watch a slideshow of pictures from Port Grand here.