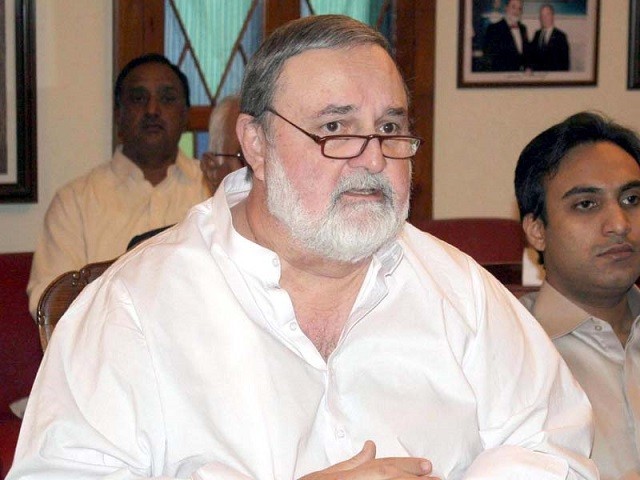 ISLAMABAD: Caretaker Foreign Minister Abdullah Hussain Haroon on Wednesday hit back at US assertion that any IMF bailout its new government might have to seek would be used to repay Chinese loans, stating that it was ‘totally wrong’ to link the two.

US Secretary of State Mike Pompeo had issued some warning words over Chinese involvement in Pakistan, shedding light on what could be another growing point of contention between the world’s two largest economies.

In an exclusive interview with CNBC on Monday, Pompeo criticised the idea of an International Monetary Fund (IMF) bailout for Pakistan. The remarks were specifically pointing to China and how it would benefit from such a deal.

“Make no mistake, we will be watching what the IMF does,” the diplomat said, in response to reports that Pakistan is planning to request a bailout package of up to $12 billion to shore up its depleted currency reserves and indebted economy.

“There’s no rationale for IMF tax dollars — and associated with that, American dollars that are part of the IMF funding — for those to go to bail out Chinese bondholders or China itself.”

Haroon said that the new elected government would have to decide whether to approach the IMF amid fears of a balance of payments crisis.

However, he also dismissed as ‘inappropriate’ comments by the US secretary of state voicing concerns over any IMF bailout being used to repay Chinese loans to Islamabad.

While speaking to reporters in the federal capital, Haroon, however; made it clear that it would be the mandate of the newly democratically-elected government of Pakistan to decide about going to IMF as the caretaker government had its limits.

Haroon also hit back at Pompeo’s comments, saying: “It is totally wrong to link an IMF package with CPEC,” and that there was “absolutely no reason for anyone to intervene” in Pakistan’s relationship with China.

“The CPEC is totality linked with the progress and prosperity of Pakistan and it will be ensured that all the projects are completed within their time frame,” he reiterated.

Pakistan, he also said, is committed to complete all the projects of CPEC – a multibillion-dollar flagship of One Road and One Belt (OBOR) initiative undertaken by China.

The foreign minister said Chinese President Xi Jinping considered Pakistan as an iron brother and absolutely there was no need for the third party to intervene in this friendship.

Chinese were already investing about $3 trillion in OBOR in the region and CPEC is one of the significant components of the initiative, he added.

About Pakistan-US ties, the minister further read out a portion Pompeo’s statement about the Trump administration’s readiness to work with the new government in Pakistan.

Haroon said why the US not speaking about helping the new government in Pakistan. He added that Pakistan expected other countries to respect its sovereignty, integrity and solidarity.

Pakistan had paid a heavy price in the long war on terror and astonishingly, it was being asked to do more, he said and referred to the military operations in North and South Waziristan districts.
Haroon said, “The government is fully committed to undertake and complete CPEC projects in their totality.”

“CPEC is important for future of Pakistan’s development and prosperity,” he added.

The government will continue to ensure that all projects are completed according to agreed terms and within the stipulated timeline, he said.

“CPEC a success will not be hostage to any third party self-serving agenda.

“As regard to seeking IMF package, we categorically state that the caretaker government has neither applied nor has the mandate to decide the matter, especially at the juncture where the democratically elected government is about to assume its responsibilities.

“It is a policy matter which has to be decided by the incoming elected government,” he stated.

He expressed concern over the implications on regional strategic stability arising from the continued US assistance to India in nuclear and dual use technologies, as is evident by the recent grant of individual licenses for the high technology weapons amounting to $9.7 billion dollars.

Haroon said, “Apart from the discriminatory approach in this area, Pakistan’s achievements in the counterterrorism area remain largely unacknowledged as evidenced by withholding of Coalition Support Fund (CSF) reimbursements.”

He said it was high-time that both countries work towards promoting shared goals of peace and development in South Asia and beyond.
The minister also highlighted Islamabad’s efforts in the Afghan peace process by facilitating and encouraging the Afghan government-led initiative with the Taliban.

Haroon expressed his wonder at the efforts which continued to throttle Pakistan and questioned the US decision to grant India the STA-1 trading status equivalent to its allies.

Moreover, the US future financial support was linked to Afghanistan, he said, noting an irrational ire over CPEC whereas the larger sums were shifted to India.

He said the issue was raised at a time when the government of Pakistan was trying to raise living standard of Pakistanis. China had not demanded anything and the efforts could be perceived to undermine the Chinese initiative here, the interim FM added.

He to a query replied that the political party set to form the government had hinted about talking to Afghanistan, India and the US which could be beneficial for the region.

Earlier this month China defended itself against suggestions CPEC was exacerbating Pakistan’s financial predicament, calling the idea ‘highly irresponsible’ and insisting that its loans account for just 10 per cent of Islamabad’s debt, which sits at roughly 70 percent of GDP.

“Even if there is a so-called ‘debt trap’, the initiator is not China,” its embassy said in a statement.