Rupee at record low against dollar

Rupee at record low against dollar

The rupee ended at an all-time low agains­t the US dollar on pressu­re from import paymen­ts. The rupee closed at...
Published: June 1, 2010
Tweet Email 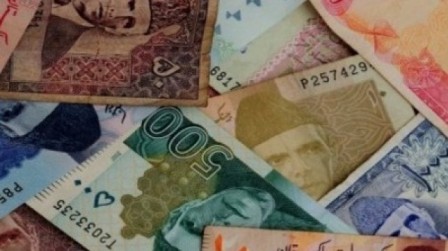 Rupee falls on back of import payment.

KARACHI: The rupee ended at an all-time low against the US dollar on pressure from import payments.

Chairman of Exchange Companies Association of Pakistan Malik Bostan told The Express Tribune that rupee depreciated at least 30 paisa against the dollar in open market.

Since State Bank of Pakistan (SBP) is not interfering and the rupee is free float, free market mechanism determines the value of the rupee.

“Dollar is in demand in the local market, which is affecting rupee depreciation in the open market,” he added.

However, the rupee has been appreciating against the pound and the euro as these currencies were under pressure because of the Greece debt and Spain’s banking crisis, Bostan said.

The downward pressure probably likely remain on the rupee at least until the announcement of the budget for the 2011 fiscal year, dealers said.

Adviser to the Exchange Companies Association of Pakistan, Naeemuddin, said that there is no loan payment pressure on Pakistan and the present rupee depreciation is because of import and export payments.

“At present, import payments are more while export earnings are low which is resulting in rupee depreciation,” he added.

“Also, there are not much remittances coming in these days. Low remittances flow implies that the role of remittances is minimal in the open market rates,” Naeemuddin said.

Banking analyst at JS Global Capital Limited Mustafa Bilwani said that it is the pre-budget pressure on rupee. Furthermore, a few companies are also engaged in imports, causing import payments pressure. The same import pressure on rupee was also seen in the last week market closure.

There is no dearth of dollar owing to the fact that IMF fifth tranche and $280 million in Coalition Support Fund (CSF) has been received by Pakistan, he said.