Most cities and towns were withou­t electr­icity for many hours
By Our Correspondent
Published: July 31, 2018
Tweet Email 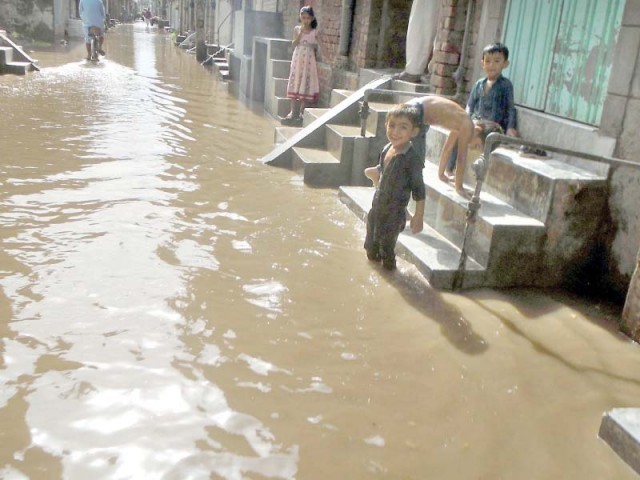 Rainwater accumulated at a street in Chiniot. PHOTO: ONLINE

As a result of the rainfall, main roads in different cities were submerged in rainwater, exposing the poor planning of civic bodies. Most of the cities and towns were also without electricity for many hours, adding to people’s miseries.

In Sialkot, intermittent rain started late Sunday night and continued on till the early hours of Monday. All major roads, including Shahab Pura Road, Miana Pura Road, Fateh Garh Road and other thoroughfares, were inundated with rainwater and sewerage.

People faced severe difficulty while commuting as the district administration failed in draining out the accumulated rainwater till filing of this report. Similarly, in Gujranwala and other cities, all roads and streets were flooded.

Heavy rains also disrupted traffic in several towns, while many feeders also tripped and resulted in power outages. However, power was restored to the affected areas after a few hours.

Meanwhile, the local meteorological office predicted cloudy weather with more rains in the province over the next few days.

Earlier, Met officials said that there are chances that the country will experience at least two to three spells of showers which will bring respite from the intense heat. They predicted that monsoon rains will help in increasing the water levels in Mangla and Tarbela dams that had reached critical level in recent months.