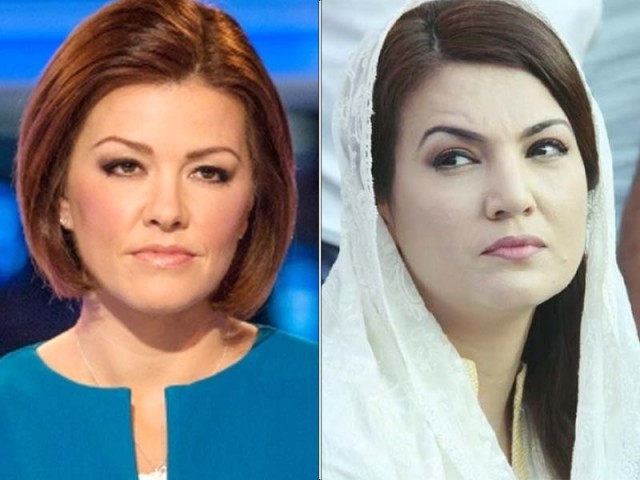 Reham has been under the media spotlight after the release of her much anticipated and controversial autobiography where she shared details of her marriage with Pakistan Tehreek-e-Insaf supremo Imran Khan, who now is being touted as the country's next premier. PHOTO: EXPRESS

British journalist and presenter Hannah Vaughan Jones on Monday said that she was at the receiving end of “torrents of abuse” for interviewing Pakistani journalist Reham Khan.

Reham has been under the media spotlight after the release of her much anticipated and controversial autobiography where she shared details of her marriage with Pakistan Tehreek-e-Insaf supremo Imran Khan, who is set to become the country’s next prime minister.

Speaking out on Twitter, Jones said that she drew a raft of abuse for the interview.

She also clarified that she had been invited to weigh in on the situation in the country with her “unique insight”.

The CNN presenter denounced those who wanted to muzzle free speech through such abuse.

Received torrent of abuse for iv w/ @RehamKhan1 @CNNi. For the record, she was invited as she has unique insight into #ImranKhan & is engaged/articulate about #Pakistan. Shame on those who would silence free speech w/hatred & disgusting language https://t.co/weIzF8K2g5

Several users wondered why Imran’s first wife Jemima Goldsmith was not asked to talk alongside Reham.

@RehamKhan1 was obviously not invited for having insight about IK but surely she was called because she is vindictive and leaves no stone unturned to malign him. Why don't you invite @Jemima_Khan who spent much more time with him and also raised his family? You seem to be biased

why invite her in the first place ? your weather girl position was vacant? she doesn't understand politics. she didn't vote? she supports corrupt leaders and all those who oppose IK. why should I not be angry? she is talking about my leader and all these are personal attacks !

Again There is a difference between CRITICISM and MALIGNAING someone's CHARACTER because you couldn't achieve what you wanted from that person .

Absolute SHAME for inviting her to the Show at the first place .

Despite the criticism, there were users who lent their support to Jones and came down hard on the intolerance in society.

It is scary how filthy our society has become and the barrage of lewd statements they are directing towards Reham and those who interview her. It is sickening. Alright to criticise and condemn but most of the comments i see here are appalling. https://t.co/TLefUbW0Em

Sorry for the his but Don’t worry we Pakistani journalist are used to of this abuse welcome to the abuse club sorry to say we don’t have freedom to speech in Pakistan https://t.co/WqHV69jLoD