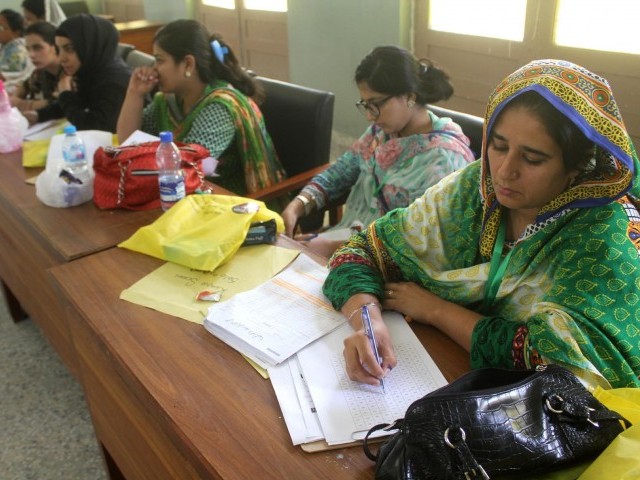 ISLAMABAD: A shortage of official forms, failure of the newly introduced Result Transmission System (RTS) and inadequate training of polling staff caused delays in election results that provided an opportunity to political parties to question the process, The Express Tribune learnt on Thursday.

Polling staff at different constituencies, including presiding and senior assistant presiding officers, disclosed that the RTS mobile application, which was developed by the National Database and Registration Authority (NADRA), failed to function properly at the time of result transmission.

A presiding officer at the NA-125 constituency said when she tried to transmit results through the RTS mobile application following the counting of ballot papers and compilation of election results her phone got frozen. Later, after a couple of minutes, it showed a message ‘The application has stopped’.

“It was around 1:40am. I repeatedly tried the same steps again and again as told us during training but all in vain. Then I decided to contact my returning officer but his phone did not respond. To meet the 2:00am deadline, which was impossible, for completion of results all of my team members rushed to the Session Courts to deliver results by hand and found long queues of polling staff,” she said.

She said it was the worst day of her life as she reached home at 5:30am after being pushed around for hours by the huge crowd. Another presiding officer said the RTS mobile application in his phone would not move past the login screen.

“Taking a picture of the election result form and its electronic transmission through the RTS system was out of the question. We were told that this application was developed by NADRA to speed up the result compilation process but it badly failed to deliver,” he said.

“Though NADRA has one of the biggest teams of IT professionals in the country and is maintaining one of the biggest citizens’ databases in the world, the RTS mobile application has put big a question mark on the competence of the authority.

“It was a very basic mobile application with a single function, namely to take a picture and transmit it to a given address, but the authority badly failed in it. Negligence of NADRA officials has caused great inconvenience to polling staff who worked in really tough and demanding environments,” he added.

A senior assistant presiding officer confirmed that complaints of political parties were true that they were not provided election results on official Form 45. He revealed that the Election Commission of Pakistan (ECP) had provided them with a limited number of forms for compilations of results.

“When we were able to give results to polling agents after counting and compilation of results, we came to know that we have insufficient forms to meet the official requirement.”

“We requested polling agents to accept results on blank paper as we had no other option available. It was around 1:15am and there was no chance of getting the available forms photocopied,” he said.

He disclosed that when they provided them polling results on blank papers polling agents started protesting. “They asked us to put an official stamp on the papers.

“We were neither told about this situation during training nor we had been issued stamps so we put the same stamp which was provided us stamping ballot papers,” he maintained, adding that the ECP did not provide training to all polling staff which was another reason of such problems.

Another presiding officer said the ECP conducted training in a haphazard manner. Polling staff at his polling station knew nothing about their duties and responsibilities.

“The ECP spent millions on training polling staff and election arrangements, but in the end, it all went down the drain as almost all political parties raised questions over the election results,” he lamented.

In a news conference on Thursday, the Chief Election Commissioner Justice (retd) Sardar Raza Khan also blamed the RTS mobile application for delaying election results. He, however, defended delays in the announcement of the general election results and ruled out all allegations of rigging. He said the result was no more than two hours late and blamed the delay on a technical glitch in the RTS system.

According to some media reports, the ECP has also decided to probe the causes of the RTS mobile application failure and fix responsibility. Though findings of this inquiry may take some time, the Punjab Information Technology Board (PITB) has disassociated itself from the RTS system.

A spokesman of the board said the board did not provide any consultation for the development of the RTS system.

“In February 2018, PITB Chairman Dr Umar Saif met with the ECP secretary and discussed various options for electronic transmission of election results. However, the board later regretted to extend cooperation for the development of the RTS system. Once the mobile application was developed, the PITB had warned the ECP about possible glitches, but nobody took action,” he added.

Judicial activism will be biggest challenge to PTI