Four soldie­rs to be deploy­ed at each of pollin­g statio­n; FC and AJK police to work under police­
By Arsalan Altaf
Published: July 26, 2018
Tweet Email 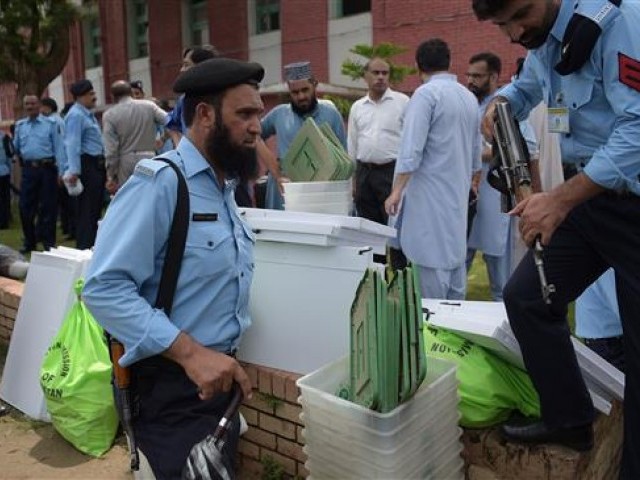 ISLAMABAD: As citizens go to the polls today, stringent security measures have been taken in the capital with over 10,000 security personnel deployed at the 786 polling stations across the city.

The Islamabad Police have deployed 7,014 officers. Apart from them, 2,400 army troops and 600 Rangers’ personnel have also been deployed in the city.

Contingents of the Frontier Constabulary and the Azad Jammu and Kashmir (AJK) police have also been deployed but they will work under the commands of the capital’s police. The paramilitary Rangers, on the other hand, will work under the army’s command.

As many as four soldiers are expected to be deployed at each of the capital’s 786 polling stations apart from deployments of police and FC personnel.

CCTV cameras have been installed at the high-risk polling stations and a control room has been set up at the Safe City command centre, while three wireless control rooms have also been established. The ICT administration has set up its own control room at the deputy commissioner’s office.

Four zonal superintendents of police, 11 ASPs/DSPs and 21 inspectors would supervise the security details in the district. Police would also provide security to EU election observers who will be visiting some polling stations in the capital.

Moreover, 33 vehicles and 44 motorbikes have been assigned patrolling duties in the city.

A total of 33 quick response teams have been constituted which would be on stand-by along with zonal commanders and sector commanders.

Furthermore, 70 additional police pickets have been set up to ensure effective checking in the city.

As many as 471 policemen from ITP would perform duties to ensure the smooth flow of traffic in the city.

To facilitate voters, parking lots have been set up 200 feet away from the polling stations.

Deployment of security personnel at polling stations had been completed by Tuesday afternoon and they will stay there overnight. Police said it would ensure the supply of food to its personnel on election day.

While chairing a meeting here on Tuesday, IGP Islamabad said that it is the responsibility of each police officer to protect the contesting candidates, voters and polling staff. He directed to accomplish this responsibility effectively and no sluggish attitude or laxity would be tolerated in this regard.

The IGP directed the security personnel to ensure lawful cooperation with election staff and perform their duties in an impartial and unbiased manner.

The IGP said that effective security was ensured for the contesting political candidates during their election campaign. He said that Islamabad Police provided security at 248 corner meetings, 272 public meetings and 245 other political gatherings while security had been enhanced in the city after terrorist incidents in Mastung, Bannu and Peshawar.