They will work in Lahore, Islama­bad, Karach­i and Quetta­
By Asif Mehmood
Published: July 22, 2018
Tweet Email 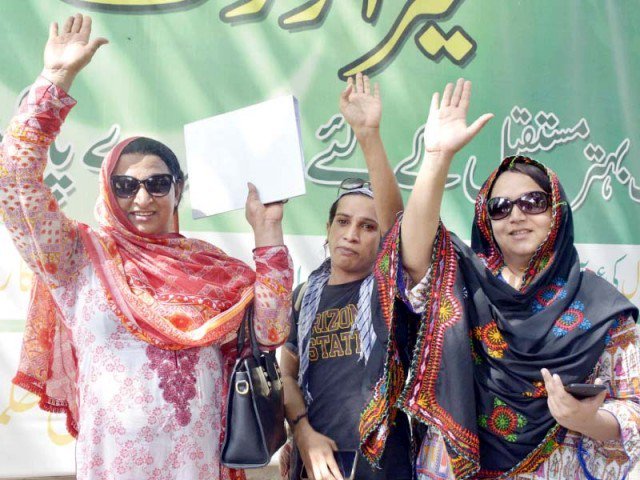 Transgender people protest against ECP for not including a separate gender section for them in the nomination papers. PHOTO: ONLINE/FILE

LAHORE: Around 125 transgender people will work as observers at various polling stations to examine the transparency and impartiality of the election process in different cities of the country.

The cities where they will be working include Lahore, Islamabad, Karachi and Quetta. The Trust for Democratic Education and Accountability (TDEA) has trained them for their role as observers.

Exploration Future Foundation (EFF) Chief Executive Officer Asif Shehzad told Express News that four transgender people, who are getting an education at his school, Gender Guardian, have also been selected.

One of the transgender persons, Maiza Rana, is happy to observe the election process in Pakistan for the first time. She says transgender people face difficulties in the provision of CNICs due to which she herself will face problems in casting her vote. “I am pleased I will be working as an observer in the elections.”

Another transgender, Moon, says she has been given the responsibility of an observer in Lahore and will examine polling stations in Chowrangi Amar Sadho, Walton and Ferozepur Road.

Shehzad says this initiative will instill a sense of confidence in transgender people.