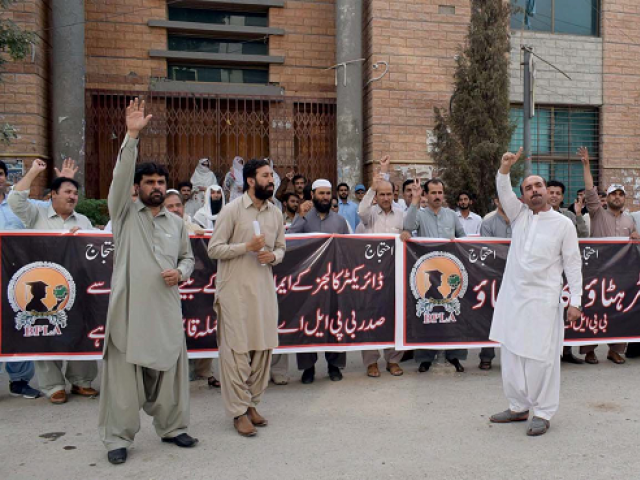 QUETTA: Upon receiving the fact-finding committee’s investigation report against the current director colleges, the Balochistan Professors and Lecturers Association (BPLA) has demanded of the provincial government to appoint on merit a new director colleges.

“Take the record of the current director colleges and conduct an audit,” demanded BPLA President Prof Agha Zahid, General Secretary Prof Nazeer Lehri, Prof Ainuddin Kabzai and others during a protest demonstration outside the Quetta Press Club on Saturday.

Addressing protesters, the BPLA leaders said, “Since the appointment of the current director, the colleges directorate’s system has not been running properly. The director is an expert in breaking the rules. The BPLA has been protesting against him for the last three weeks wherein college teachers are wearing black bands on their arms in protest.”

They said, “The department had formed a fact-finding committee, which has completed its investigation and released a report. The report proves that the BPLA’s concerns are correct and the protest is justified.”

They further said that the BPLA met caretaker Chief Minister Alauddin Marri, education minister, secretary colleges and various other officials and apprised them of the entire situation.