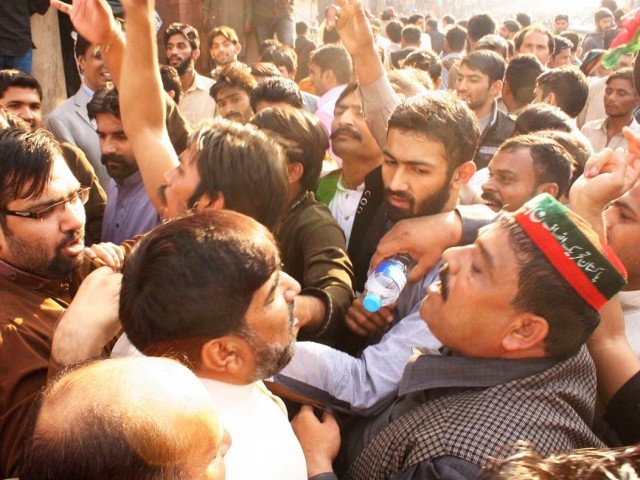 LAHORE: An Anti-Terrorism Court granted pre-arrest bails to more than ten PML-N leaders and workers who were allegedly involved in damaging public property during a rally led by former chief minister Shehbaz Sharif. The rally was taken out to express solidarity with former prime minister Nawaz Sharif on his arrival from London.

The former PM was on his way back to Pakistan, along with his daughter, to serve jail time as the two were sentenced to ten and seven years, respectively, in the Avenfield property case. The father and daughter were found to have accumulated assets beyond their known sources of income.

The court awarded pre-arrest bails to former PML-N leader Mehar Ishtiaq, a former MNA, Deputy Mayor Mehar Mehmood, chairmen Chaudhary Muhammad Afzal and Busharat Ali, Malik Asif, Imran, Kamran and others. These accused individuals would have to furnishing bail bonds of Rs.100,000 each. The petitioners argued before the court that they had been implicated in fabricated cases by police officials who were trying to show their “efficiency”. The suspects maintained they had nothing to do with the case and had not damaged any public property.

They asserted that the rally to express solidarity with their leader Nawaz Sharif, on his arrival, was a peaceful one. The accused maintained that they took decorum into account when participating in the rally led by outgoing chief minister Shehbaz Sharif. They contended that police officials not only arrested their leaders and workers, but also implicated them in false cases. The PML-N workers and leaders asked that court grant pre-arrest bails as they were innocent of the charges. They pointed out that there was no truth to the charges of violence which had been framed against them in the FIR. The ATC judge court granted pre-arrest bails on the assurance that they will cooperate with the police and other institutions to join their investigation.

On Sunday, Capital City Police Officer (CCPO) said all those involved in violence on the day of Nawaz and Maryam’s return would be arrested.  In a statement issued to the media, he said Pakistan Muslim League-Nawaz (PML-N) leaders and workers would be taken into custody for attacking police officials, damaging government property and creating a law and order situation.

“I haven’t stopped anyone from arresting the suspected protesters involved in disrupting peace in the city. I ordered the investigation wing of the Lahore Police to probe the matter on merit and follow legal procedures,” he said. He added that they were investigating all incidents of violence from different angles. “The arrests will be made on the basis of evidence. Senior police officers are looking into the cases.”

The cases were registered against PML-N activists, including their top leadership, on charges of terrorism, attempt to murder, interference in government matters and violation of Section 144. These cases were registered in different police stations of the city and around 20 police officers were injured in clashes during the PML-N rallies.

Ahead of the Sharifs’ arrival in Lahore on Friday, the city administration of Lahore advised the Pakistan Muslim League-Nawaz (PML-N) leadership to abstain from holding public gatherings in the metropolis.

“The government of Punjab has prohibited holding of assemblies, gathering, sit-ins, rallies processions and demonstrations throughout the province in the larger public interest, except those gatherings which are held in secured, walled premises and duly allowed by the concerned deputy commissioner,” read the notification.

“It is evident that your political party has not applied for permission to hold rallies.” The notification added that this decision was taken in view of the serious security threats specifically to the senior leadership of PML-N.