France is often in the spotlight for its Islamophobic social policies

Manchester United star Paul Pogba while performing hajj. PHOTO COURTESY: TWITTER/MARWAN AHMED
KARACHI: As Les Bleus clinched their second World Cup title after a thrilling final win over Croatia, social media was quick to underscore that the team had seven Muslim players in it and how the country must apply its on-field victories off the field as well.

The country which is often in the spotlight for its Islamophobic social policies won the ultimate footballing prize with a team that is one-third Muslim.

Twitterati called on France to put an end to its "hypocrisy" and acknowledge the foundational and positive role Muslims play in developing its society.

In pictures: French take to the streets in celebration after World Cup victory 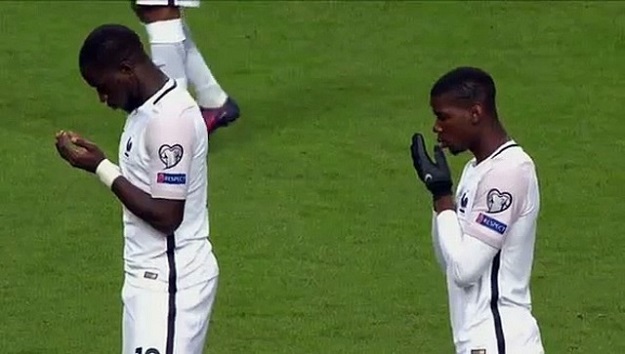 Paul Pogba seen praying before a match against the Netherlands. SCREENGRAB: DAILYMOTION

"With France passing all these laws against Islamic practices, let's not forget it's these same Muslims players who helped win #WorldCup2018," one Twitter user wrote.

Some called on France to recognise the victory as a much-needed wake-up call for the country to adopt policies upholding the rights and dignity of migrants and Muslims.

78% of the French football team are immigrants, and 50% are Muslim.

Muslim immigrants rebuilt France after the Second World War, and they've helped make France the #1 team in the world.

Diversity is strength. Racism is weakness.

Sitting in wondering what would France be like if the French fought as hard against anti-African racism and Islamaphobia as it is currently celebrating winning the #WorldCup delivered by a team with an overwhelming majority of Africans and Muslims.

Muslims are not all terrorists✋

Their faces illuminated on the Arc de Triomphe, a symbol of the nation.

Islam CAN coexist with French identity.

It’s not just about African angle though - Islamophobia is rife in France & this goes beyond anti-black racism. The fact that a proudly Muslim player scored Sunday matters a great deal to a lot of French Muslims who I know who face massive discrimination that goes beyond race.

Mahen | 3 years ago | Reply Pakistan cricket and hockey teams have more than half from Hindu-christian community. I rest my case.
Khan | 3 years ago | Reply @Hasan: It's not emotional hogwash Hasan, Just like you said France gave them opportunities, same is being asked by all the twitteratis above, oppotunities should be given to every one equally not to only those you think could benefit you because one could see some talent in them during their early days.
VIEW MORE COMMENTS
Komal S | 3 years ago | Reply @Hasan: Can't agree with you more. Also in muslim countries, not only the minorities do not show up in national teams their overall numbers keep dwindling every year.
Hasan | 3 years ago | Reply Let's be honest - France gave them a chance to shine. Opportunities they never would have had in their corruption-ridden Muslim countries. All else is mere emotional hogwash.
Replying to X
Saved ! Your comment will be displayed after the approval.
Error !
Error! Invalid Email.