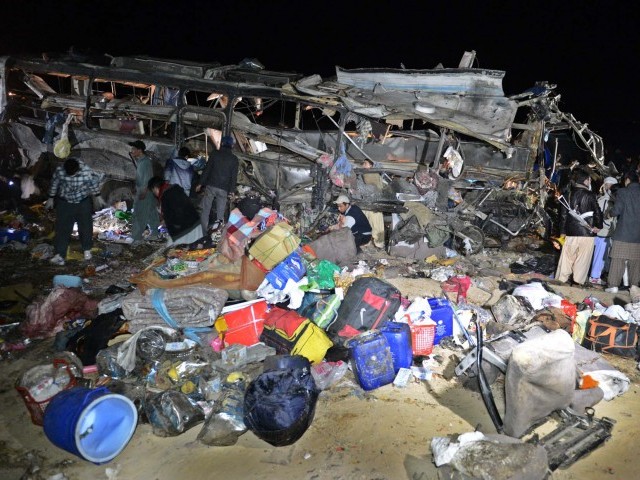 Luggage (foreground) of pilgrims who were traveling in the bus (background) before being attacked near Mastung. PHOTO: BANARAS KHAN/EXPRESS

LAHORE: The Punjab government has offered to provide free medical treatment and healthcare facilities to the victims of Mastung blast in the hospitals all over the province, says a letter from Punjab Chief Secretary Akbar Durrani.

In a letter to Balochistan Chief Secretary Akhtar Nazir Warraich, the provincial government has liked to extend its support to the victims.

Punjab government strongly condemns the sad incident of the suicide bombing in a political gathering in Mastung district of Balochistan where at least 149 lost their lives and about 150 sustained injuries, it adds.

In this hour of grief and sorrow, the government and people express sympathies and solidarity with the families of the victims, adds the letter.

The Punjab chief secretary in his letter further said that there is no substitute to the human lives, however, sufferings of victims should be mitigated by extending all sort of help and care to the injured and bereaved families.

Akbar Durrani further said that the government, in this regard, is ready to provide free medical treatment to the victims of the blast through its facilities spread all over the province.

He further said that it will be a privilege for the people and the Punjab government to help our brethren in this hour of need.

The chief secretary has also prayed that may Allah bestow his blessings on the departed souls and speedy recovery of the injured.

On the other hand, on the instructions of caretaker Punjab Chief Minister Dr Hasan Askari, a Black Day was observed all over the province on the incidents of Bannu and Mastung.

Dr Hassan Askari said the loss of precious human lives in Mastung is a national loss and the whole nation is standing in solidarity with the bereaved families in this hour of anguish.

He said that the Punjab government also announces complete cohesion with the lamenting families and we pay tribute to the sacrifices of martyrs.