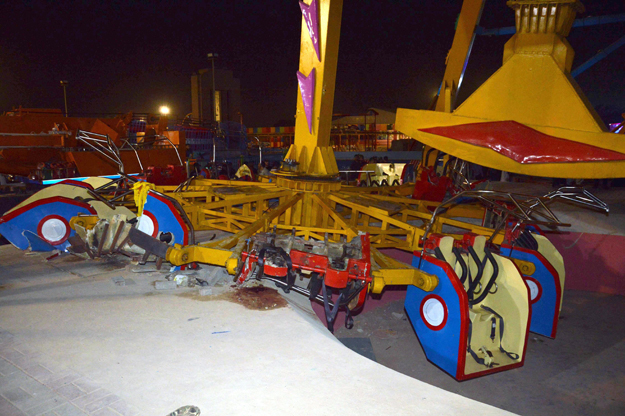 KARACHI: A 12-year-old girl, Kashaf Dukhtar, was killed and 25 others injured when a ride, being operated on a trial basis, in Karachi’s newly-inaugurated Askari Amusement Park broke apart on Sunday night.

“It was around 40-feet above the ground when it crashed,” an eye witness Aslam told The Express Tribune. “There was a loud bang and people ran here and there,” he said, adding that the park’s management suddenly disappeared from the scene.

Video footage of the horrific incident surfaced on social media soon after the incident, in which visitors can be seen rushing to the scene to try to help those trapped after a part of Discovery, the frisbee pendulum ride that can spin a complete 360-degree revolution, collapsed to the ground. This type of ride features a circular gondola that rotates as it swings back and forth. Riders are seated on the gondola facing inward or outward, depending on the model.

The 30-acre park near Karachi Central Jail, which once used to be teeming with vegetable and fruit vendors which gave it its colloquial name, Old Sabzi Mandi, is now home to “Askari Amusement Park”, which opened to the public on the first day of Eidul Fitr.

No checks and balances

Two days before opening, the park’s managing director, Shafqat Jafri, had told The Express Tribune that the machinery had been imported from China. On a query regarding safety checks, he had said that no officials had visited the park yet as there were no laws governing such rides in the country. The International Organisation for Standardisation (ISO) team, he had said at the time, would visit the park in a few days.

For his part, Karachi Commissioner Sauleh Faruqi, while visiting the park after the incident on Sunday night, failed to identify which government body kept a check and issued NOCs to such parks. “For rescue and defense, we have Civil Defense,” he told The Express Tribune. “But there’s no organisation for inspection [of such parks].”

Faruqi added that the Commissioner Office’s administration team, along with the police, had been deployed and the park would remain closed until the inquiry was completed. “The injured have been moved to Liaquat National Hospital,” he said, adding that their treatment cost would be borne by the provincial government. “Experts will be on taken board for the inspection,” he assured.

Meanwhile, the civil bureaucracy and the caretaker government seemed to jolt into action following the incident. Caretaker Chief Minister Fazlur Rehman and Sindh Police chief Amjad Javed Saleemi took notice of the incident and issued directives for inquiry reports to be submitted to them. The chief secretary, Maj (retd) Azam Suleman Khan, went a step further and ordered the closure of amusement rides across the province for the next three days. The rides, he ordered, would be opened to the public after technical inspection within the three days.

After the unfortunate incident took place residents of Karachi were quick to react on social media holding the authorities responsible.

#askari Park should be shut down for ever. For good. It looks so dangerous from outside looks like chair ride is going out of the boundaries. What waste of innocent life. The culprit should be punished. But sorry this is Pakistan. Who cares. @Kashifabbasiary @WaseemBadami

One joyRide at #Askari park #Karachi fell down ,so many injured
Kids are under the heavy Ride
No one from the administration is nearby to help them

Completely devastated by the saddening incident in #AskariAmusementPark. Immediate inquiry should be held against the management of #Askari for such irresponsible management. And above all, it… https://t.co/hyGtzE0tvo