'Humble' Macron responds to critics in state of the union address

'Humble' Macron responds to critics in state of the union address 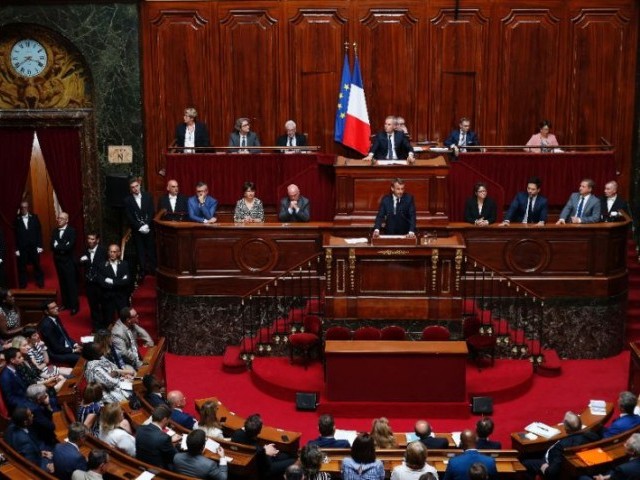 VERSAILLES (FRANCE): Seen by critics as arrogant and uncaring, French President Emmanuel Macron struck a humble note Monday while defending his pro-business approach in his annual address to both houses of parliament.

The 40-year-old centrist, elected in May last year, has started a tradition of making a once-a-year speech at the opulent Palace of Versailles, a French equivalent of the State of the Union speech in the United States.

Macron began with a nod to critics of his leadership style that has seen him attacked by his opponents as monarchical, and even led to misgivings in his own party about the concentration of powers in the presidential palace.

“I know I can’t do everything, I know that I can’t succeed with everything,” he told the 900 lawmakers, adding that he was in front of them feeling “humble, but resolute”.

In a speech that was focused mostly on France and contained few detailed policy announcements, Macron stressed that he would not lower his sights.

“The president has an obligation to aim high, and I do not intend to fail with this obligation,” he added.

Over 90 minutes, he detailed his early legislative successes including corporate tax cuts, an easing of labour laws, reforms to university entrance procedures and a revamp of state rail operator SNCF.

He also defended his focus on cutting taxes and improving France’s business environment — which has seen him dubbed “president of the rich” by his domestic opponents on the left.

“Policies that help companies are not for the wealthy. They are policies for the entire nation, policies that add jobs,” he said.

“If we want to share the cake, the first condition is that there is a cake,” he said in reference to calls from some lawmakers for more tax-and-spend measures to help the poor.

“It’s companies, made up of managers, shareholders and workers, who make this cake,” he explained.

Macron has also vowed to cut state spending, among the highest among wealthy countries relative to its economy, in order to balance the French budget for the first time in over 40 years and to tackle the country’s crippling debt.

“There can be no tax cuts or increased investments without slowing the continued growth of our spending,” Macron told the lawmakers, promising “bold and courageous decisions”.

His speech came after he recently complained that the country spent “a crazy amount of dough” on social programmes and amid reports his government will announce thousands of job cuts in France’s tax and customs administrations.

“Everybody wants lower taxes… but nobody ever wants to take responsibility” for financing them, he added.

Stephane Rozes, a political commentator and head of consultancy group Cap, said there was a major absence in Macron’s speech: the European Union.

Macron was elected on a fervently pro-European programme and has spent huge amounts of time and effort trying to convince Germany in particular to deepen the bloc and go further in linking the zone’s economy.

“He skipped over the decisive issue: the blockage in Europe,” Rozes said.

German Chancellor Angela Merkel “is not moving”, Rozes said, and nationalists are gaining ground politically across the 28-member union.

Macron said that the main division in Europe was between “progressives” like himself and “nationalists” who would face each other at the ballot box next year during elections for the European Parliament.

Reacting to his speech, Socialist party spokesperson and MP Boris Vallaud called it a “soulless catalogue of technical measures” and called it a “narcissistic image-making exercise”.

Macron has faced criticism over the cost of bussing out hundreds of lawmakers to France’s former royal seat and deploying dozens of Republican Guards who flanked his ceremonial entry — estimated at 300,000 euros ($350,000).

He is only the third French president to address lawmakers at Versailles in recent memory, and the first to do so twice.

Francois Hollande spoke there after the Paris terror attacks of November 2015, and Nicolas Sarkozy did so in June 2009 after the global financial crisis erupted.