With the politi­cal opposi­tion in tatter­s, Macron has vowed to press on with his bid to reboot the econom­y
By Reuters
Published: May 6, 2018
Tweet Email 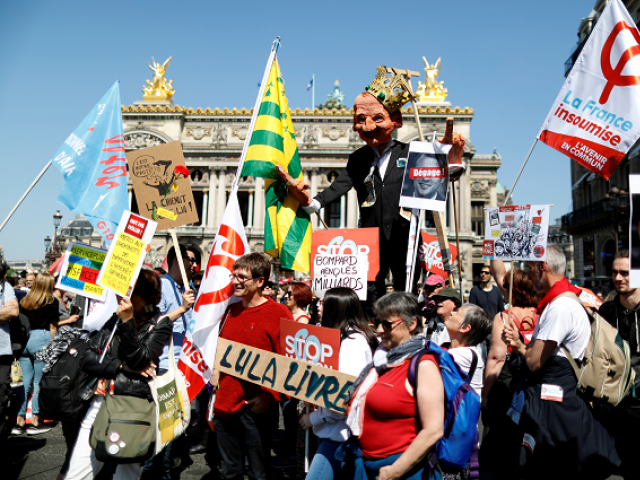 Protestors bearing 'Stop Macron' banners and chanting “one year is enough” were cheered on by drummers and marching bands PHOTO: REUTERS

PARIS: Tens of thousands of demonstrators took to the streets in Paris on Saturday to protest against the stream of economic reforms brought in by French president Emmanuel Macron since coming to power a year ago.

Protestors bearing ‘Stop Macron’ banners and chanting “one year is enough” were cheered on by drummers and marching bands in an anti-celebration of Macron’s time in office organised by a member of the hard-left France Unbowed movement.

The carnivalesque atmosphere follows a tense May Day rally in Paris, when hundreds of masked and hooded anarchists torched cars and hurled rocks at police on Tuesday, hijacking a demonstration called by labour unions.

Saturday’s demonstration, under a large police presence, comes almost a year to the day since 40-year-old Macron won the presidential race on a centrist platform and with a pledge to shake-up rigid institutions and revitalise the economy.

A wave of reforms soon followed, including an overhaul of labour laws that has made it easier for companies to hire and fire, earning Macron the tag of “president of the rich” among detractors and sparking discontent from labour unions.

With a political opposition in tatters, Macron has vowed to press on with his bid to reboot the economy, even as he faces one of his sternest tests to date with a rolling strike by rail workers protesting a shake-up at state-owned train company SNCF.

Members of France Unbowed, headed by Jean-Luc Melenchon who also stood for the presidency last year, have sought to fire up a backlash against Macron’s policies by getting backers onto the streets.
The party estimated 160,000 people took part in Saturday’s protest – the Paris prefect’s office put the tally at 40,000 – and France Unbowed is pushing to hold a much larger rally with unions and other forces on May 26.

French President in ‘delicious’ faux pas on tour Down Under

“The issue here are the endless gifts being made to the rich while the French people are struggling,” Melenchon told TF1 television ahead of the march, which drew a diverse crowd, from hospital workers and parent groups to communist supporters.

There were a few isolated scuffles at the march and at least four people had been arrested, while one policeman was injured, the police prefect’s office said.

Yet despite simmering protest movements, on the 50th anniversary of the May 1968 student riots that brought France to its knees, unions have lost clout and the mood is far from revolutionary.

Some 45 per cent of French people gave Macron’s first year in office the thumbs up, according to a poll of more than 13,500 by Ipsos-Sopra Steria published on Saturday in Le Monde, with the planned overhaul of the SNCF proving the most popular reform.

But when asked about the government’s reform methods, 55 per cent of people taking part in the survey said they thought they were too authoritarian.

McCain does not want Trump at his funeral: reports