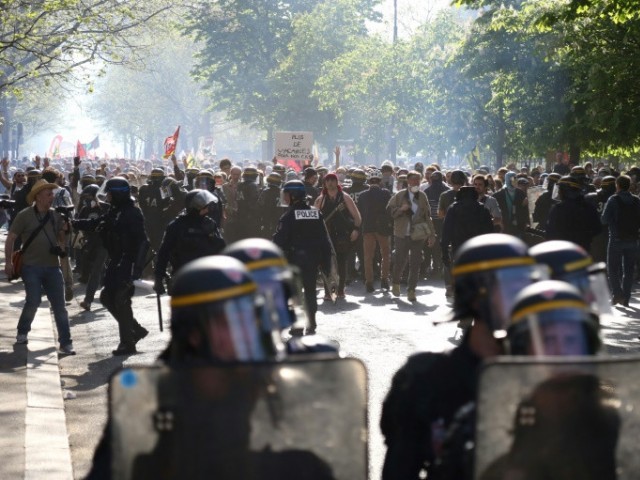 PARIS: Striking rail workers, civil servants and students demonstrated across France on Thursday against Emmanuel Macron’s public sector reforms but in markedly lower numbers than a month ago as unions struggle to rally the president’s opponents.

Under sunny skies, tens of thousands marched, chanted and waved anti-Macron banners in Paris, Lyon, Marseille and other cities.

But the number of demonstrators was down sharply on the last day of nationwide action a month ago, according to the interior ministry, which estimated that 119,500 people took part — a little over half the 200,000 it said took to the streets on May 22.

The hard-line CGT union, which fronted the rallies, claimed a far higher turnout of nearly 300,000 — a figure still significantly smaller than its estimate of half a million in May.

The low turnout was seen as a setback for unions and left-wing parties, who have been hoping that the various groups opposed to Macron’s liberal reforms will coalesce into a mass movement and eventually force him to back down.

Some left-wingers are even dreaming of a re-run of the huge May 1968 demonstrations that nearly toppled the government of Charles de Gaulle.

But polls also show voters yearning for a firm hand with most saying he should not give into the striking rail workers or students leading the pushback.

“Either he shows his ability to reform or he fails, and then it’s difficult to know what he will able to do for the rest of his term.”

Pressure has been mounting on Macron nearly a year since the 40-year-old centrist swept to power, with a survey by Ifop-Fiducial released Wednesday suggesting that 58 per cent of voters were unhappy with his presidency.

A resolutely upbeat CGT leader Jean-Luc Martinez insisted the resistance was “getting bigger” — a view shared by anti-capitalist politician Philippe Poutou, who told BFMTV channel: “It’s only starting to build.”

The independent Occurrence consultancy estimated that 15,300 people took part in the main march in Paris, which was marred by isolated clashes between police and far-left activists.

“We’re here for public services. We’re ready to continue the whole summer, even into September and October,” Helene Tricre, a 25-year-old ticket inspector working for the SNCF railway, told AFP at the start of the largely peaceful demonstration.

Rail workers, who embarked Wednesday on their fourth strike since the start of April, were out in force.

Staff at the debt-laden SNCF are striking two days out of every five against plans by Macron to cut job-for-life guarantees and pension privileges for new recruits.

But the number of strikers is down noticeably from two weeks ago.

Only one in three high-speed TGV trains operated Thursday, but this was considerably higher than at the start of April when only one in eight took on passengers.

Macron has vowed to stand firm on plans to make France more competitive, claiming a solid mandate from his election last year in which he swept away the traditional parties that governed for decades.

“I’m doing what I said I would,” he told a television interviewer last week.

Opinion polls suggest France remains deeply divided about his leadership, despite a sharp fall in unemployment and a pick-up in investment partly accredited to his business-friendly policies.

An Elabe survey showed Friday that 52 per cent of respondents felt his election has proven “a bad thing”.

Another survey, released Wednesday, found 58 per cent were unhappy with his presidency.

“People who generally have a good financial and professional situation support Macron, but among those who aren’t so well off, it’s much less,” said Vincent Thibault, a researcher at Elabe.

Leftists accuse Macron of trying to break up public services, citing his pledge to cut 120,000 public sector jobs over his five-year term.

The government points to France’s mounting debt, equivalent to nearly 100 percent of GDP, in arguing the need to make painful choices.

Thursday’s protests included many students who have blocked access to four of the country’s 70 universities, angered by plans to make admissions more selective.

Despite his difficulties, Macron may take heart from divisions in the labour movement.

“I think the public doesn’t understand the different demands, and there doesn’t seem to be as much sympathy for the unions as we’ve seen in the past,” said Zumsteeg, the Ipsos pollster.