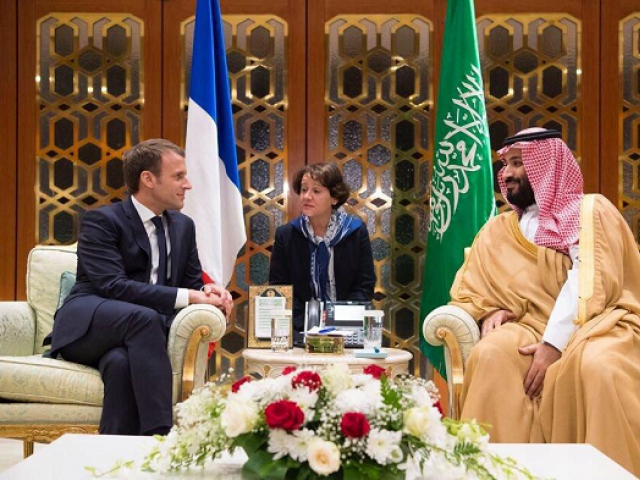 PARIS: Saudi Arabia’s crown prince dined with French President Emmanuel Macron at Paris’s Louvre museum on Sunday after arriving on a three-day visit aimed at reshaping his kingdom’s austere image as he presses ahead with plans to reform the conservative petrostate.

Macron faces a diplomatic tightrope in talks with Prince Mohammed bin Salman, set to focus on cultural ties and investments as well as the war in Yemen, dubbed the world’s worst humanitarian crisis, and the kingdom’s arch-nemesis Iran.

After much speculation on the prince’s schedule, Macron’s office said he hosted a dinner for the 32-year-old prince at the historic museum.

The dinner, held behind a tight security cordon, sets the tone for the official part of the visit starting Monday, which follows a weeks-long tour of the United States, Britain and Egypt where he courted a host of multimillion dollar deals.

Around 18 memorandums of understanding in energy, agriculture, tourism and culture are set to be signed at an official Saudi-France CEO Forum on Tuesday, a source close to the crown prince’s delegation told AFP.

A Franco-Saudi deal to develop Al Ula, a Saudi city richly endowed with archeological remnants, is also set to be a central highlight of the visit, the source added.

The agreement calls for the creation of a dedicated agency modelled on the lines of the French museums agency, which spearheaded the setting up of the Louvre museum in Abu Dhabi.

But in an apparent setback, the prince’s visit to the Paris-based tech start-up campus Station F, scheduled for Monday with French Prime Minister Edouard Philippe, was cancelled.

In another embarrassment, dozens of people staged a protest Sunday in the southern city of Aix-en-Provence, where the prince had previously been expected to attend a concert.

One picket sign read “Don’t sell arms to Saudi Arabia”, according to an AFP reporter.

The visit by the heir to the Saudi throne comes after a tumultuous period at home that saw a major military shake-up and a royal purge as he consolidates power to a degree well beyond that wielded by previous rulers.

The prince has used his global tour to project his reforms — including the historic lifting of a ban on women driving, cinemas and mixed-gender concerts — as part of his pledge to return the kingdom to moderate Islam.

Backed by high-power lobbying and public relations firms, the prince is seeking to rebrand Saudi Arabia as a modernist oasis instead of an austere kingdom known for exporting jihadist ideology and subjugating women.

“He is marketing Saudi Arabia as a strategic and business partner to the West and a force of stability in the region, as compared to rival Iran which he presents as a destabilising force,” he said.

Saudi prince says Israel has ‘right’ to its land

“Saudi Arabia is not resetting diplomatic ties with France,” a source close to the Saudi government told AFP.

“The leadership of both countries share much in common. They are both young, visionary and ambitious.”

But the trip follows a period of underlying tensions, with Macron seeking to bolster ties with the Arab world’s biggest economy while also managing other relationships with Middle Eastern nations.

Macron waded into a regional crisis last November when Lebanon’s Prime Minister Saad Hariri tendered his resignation on live television from Riyadh, apparently under pressure from the crown prince.

Macron invited Hariri to Paris for talks and he has since rescinded his resignation, a development that analysts say exposed the limits of the prince’s authority.

As US President Donald Trump threatens to tear up the 2015 nuclear cooperation deal with Iran, Macron also faces the challenge of convincing the prince that some agreement to curb Tehran’s atomic ambitions is better than no deal at all, experts say.

The crown prince, however, has emphasised closer ties with Washington just as Macron has sought to improve relations with Iran.
Macron faces seething criticism over French weapon exports to Saudi Arabia, including Caesar artillery guns, sniper rifles and armoured vehicles, despite the kingdom’s role in the Yemen crisis.

Three out of four French people believe it is “unacceptable” to sell weapons to Saudi Arabia, according to a poll last month by independent research group YouGov.

Last week, 10 international rights groups implored Macron to pressure Prince Mohammed over the Saudi-led bombing campaign in Yemen, claiming it is exacerbating a humanitarian crisis for thousands of civilians.