'We have extrem­ists who forbid mixing betwee­n the two sexes'
By AFP
Published: March 19, 2018
Tweet Email 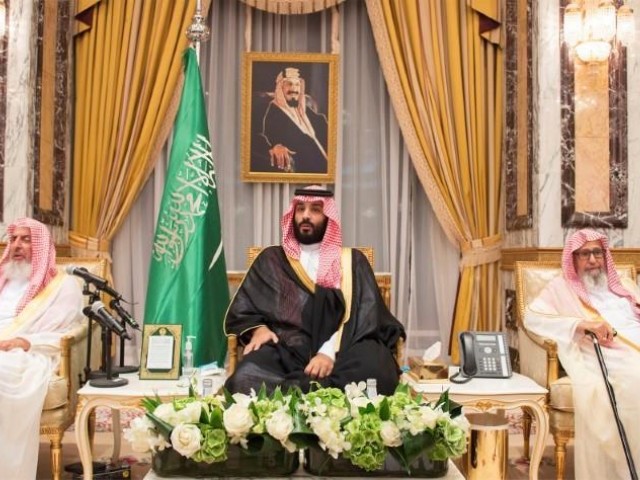 Mutual rival Iran will be high on the agenda, but the 32-year-old strongman prince will also be looking to showcase his sweeping changes to Saudi society and an increasingly assertive foreign policy that includes the war in Yemen and an ongoing diplomatic feud with Qatar.

The following are quotations from an interview he gave to CBS News on Sunday.

Prince Mohammed has implemented some reforms on women’s rights, loosening clothing restrictions, pushing for greater participation in the workforce, and, significantly, lifting a ban on women driving.

But guardianship laws, which require women to seek the permission of male relatives for a host of activities, remain in place.

“We have extremists who forbid mixing between the two sexes and are unable to differentiate between a man and a woman alone together and their being together in a work place. Many of those ideas contradict the way of life during the time of the Prophet Muhammad (PBUH),” he said.

“We are all human beings and there is no difference.”

The prince acknowledged Saudi society was dominated by particularly harsh strain of conservative Islam, which he traces back to 1979, the year of the Islamic Revolution in Iran and the seizure by extremists of the Grand Mosque in Mecca.

“We were victims, especially my generation that suffered from this a great deal,” he said.

“We were living a very normal life like the rest of the Gulf countries. Women were driving cars. There were movie theaters in Saudi Arabia. Women worked everywhere. We were just normal people developing like any other country in the world until the events of 1979.”

He defended at length his anti-corruption purge which saw many of the kingdom’s princes and tycoons detained for several weeks inside Riyadh’s luxurious Ritz-Carlton hotel – widely seen as an attempt to cement his grip on power.

“What we did in Saudi Arabia was extremely necessary” and legal, he said.

He said he was able to recover more than “$100 billion” of ill-gotten wealth from the detainees, but added: “The idea is not to get money, but to punish the corrupt and send a clear signal that whoever engages in corrupt deals will face the law.”

The prince has been accused of hypocrisy over his opulent lifestyle at a time his government is preaching greater austerity of its citizens and has imposed new taxes.

He was recently revealed as the owner of a French chateau described as the world’s most expensive home, according to a report in the New York Times.

But he insisted his wealth was a private matter. “As far as my private expenses, I’m a rich person and not a poor person. I’m not Gandhi or Mandela.”

In a first, Saudi women allowed to join civil defence

He added: “But what I do as a person is to spend part of my personal income on charity. I spend at least 51 percent on people and 49 on myself.”

As heir to the throne after his father King Salman dies, the young prince could be set to rule the kingdom for the next half century or more.

Asked what could stop him, he replied: “Only death.”