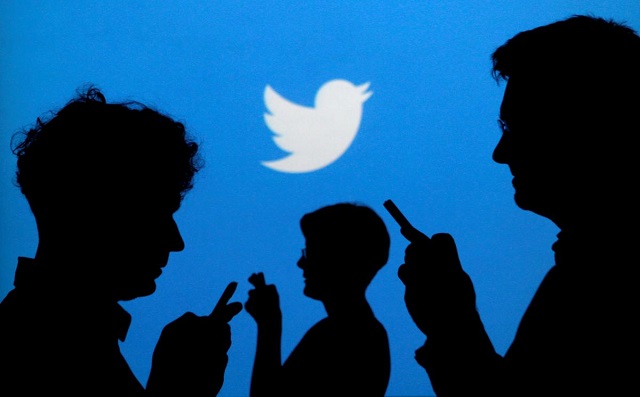 People holding mobile phones are silhouetted against a backdrop projected with the Twitter logo in this illustration picture taken in Warsaw September 27, 2013. PHOTO: REUTERS

Twitter Inc suspended more than one million accounts a day in recent months to reduce the flow of misinformation on the platform, the Washington Post reported.

Twitter and other social media platforms such as Facebook Inc have been under scrutiny by US lawmakers and international regulators for doing too little to prevent the spread of false content.

The companies have been taking steps such as deleting user accounts, introducing updates and actively monitoring content to help users avoid being a victim to fake content.

Twitter suspended more than 70 million accounts in May and June, and the pace has continued in July, the Post reported on Friday, citing data it obtained.

Twitter’s MAU is expected to grow nearly 3 percent to 337.06 in the second quarter, according to Thomson Reuters I/B/E/S.

“My guess is that a large number of these suspended accounts were dormant … it should have little impact on the company,” Pachter told Reuters.

If the 70 million were mostly active accounts, the affected accounts would have been “screaming bloody murder”, added the analyst.

According to a Washington Post source, however, the aggressive removal of unwanted accounts may result in a rare decline in the number of monthly users in the second quarter.

“Due to technology and process improvements during the past year, we are now removing 214 percent more accounts for violating our spam policies on a year-on-year basis,” the company said in a blog post last month.

In May, it identified and challenged more than 9.9 million “potentially spammy” or automated accounts per week, compared with 6.4 million in December 2017.

Shares of Twitter fell marginally to $46.50 after the bell on Friday.