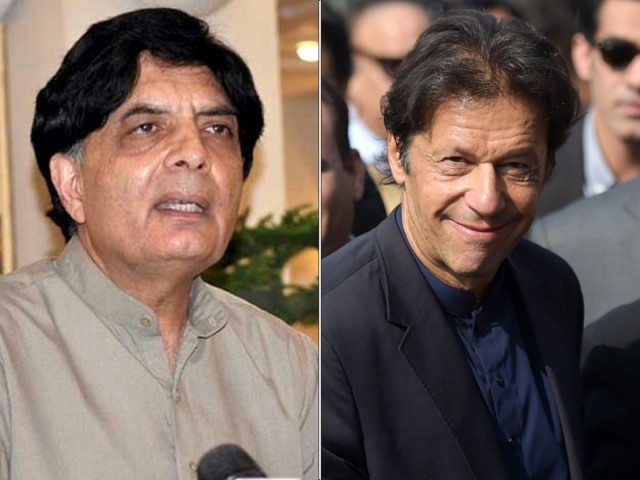 A formal contact, Sarwar claimed, “had been made through a mutual friend and Imran was willing not to field a PTI candidate against Nisar in NA-59 (Rawalpindi)”.

“Nisar has been my political rival for years. And I strongly opposed the proposal when it was shared with me,” said Sarwar, who is PTI’s candidate against Nisar in NA-59 and NA-63.

Sarwar had defeated Nisar in the Taxila constituency in the 2013 general elections.

He made these revelations while addressing a news conference and demanded that the Election Commission of Pakistan take notice of alleged violations of the code of conduct by the former interior minister.

“[Nisar] has been running his election campaign using state resources. He still enjoys the VIP protocol given to him in the past as interior minister,” he alleged, adding that a heavy contingent of police guarded him during his campaign rallies, which is tantamount to influencing voters who might think Nisar was still in power.

Sarwar said he had already lodged a complaint against Nisar with the district election commissioner.

The PTI leader, on the occasion, questioned the source of income of Nisar who has managed to purchase three plots in DHA and established a huge poultry farm in the Chakri area of Rawalpindi.

“Nisar was the most corrupt member in Nawaz Sharif’s cabinet. He shored up revenues through police stations and revenue clerks,” alleged Sarwar.

“Nisar should explain how he had purchased plots C-127, C-128 and B-128 in DHA Rawalpindi Phase II,” he said, adding that the disgruntled PML-N leader had not mentioned his Chakri poultry farm in his income tax returns.

“When he started politics in 1985, he had no urban property. Now he goes abroad for vacations and lives in a 25-kanal house,” he said.