US teachers quietly train to carry guns into school

US teachers quietly train to carry guns into school 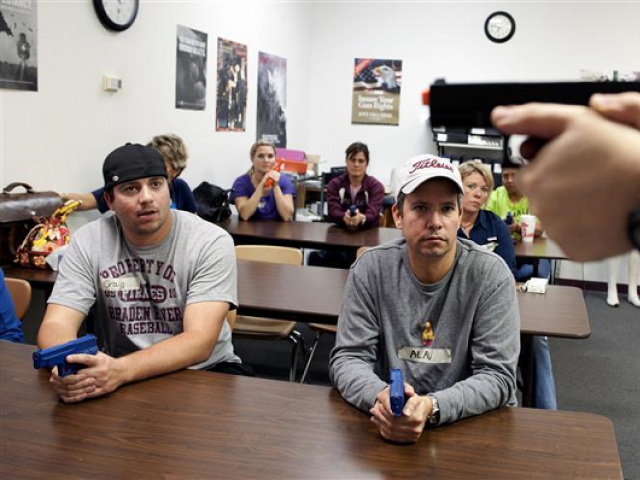 The non-profit group FASTER, set up after 20 small children were killed in 2012 at Sandy Hook Elementary School, has trained more than 1,300 US school staff, mostly in Ohio, on how to use a handgun in the event of a school shooting.

Sixty-three of them have been trained in Colorado, home to the 1999 Columbine High School shooting. The swing state has a Democratic governor and both a Democrat and a Republican in the US Senate.
“I think it’s scary to people to bring a weapon into school,” conceded Katie, a first-grade teacher in Jefferson County, west of state capital Denver, who declined to give her second name.

“They just see the bad side, not the positive side of how guns can save people,” the 27-year-old told AFP.

Facial recognition was key in identifying US shooting suspect

She was a student this week at the three-day, $1,000 course in Commerce City outside Denver.

The United States is the only developed country in the world that suffers relentless school shootings with roughly one a week, according to Everytown for Gun Safety, a group working to restrict firearms.

America’s gun violence epidemic kills around 33,000 people each year. More than 214,000 students have experienced a school shooting in the United States since 1999, according to a Washington Post database.

As shootings multiply and Congress remains paralyzed, FASTER saw an uptick in business, even before President Donald Trump supported arming teachers in the wake of a Valentine’s Day massacre in Florida.
“I had to add four additional classes to our schedule to meet demand this year, but I don’t think it was related to Trump,” Ohio director Joe Eaton said.

Colorado law prevents anyone from carrying weapons onto school grounds with the exception of school resource officers — law enforcement responsible for safety in schools — and security guards.
Many on the course are prohibited from being armed at school, but hope their training will help their districts change their minds.

The curriculum includes handgun basics, range shooting, casualty care tactics and roleplaying with an active shooter and simulated fire.
“I will definitely talk to my principal and security,” said high school physics teacher John MacFarlane, 40, seeing weaknesses in his district’s security protocol after the exercise.

Wayne, a facilities manager at a rural primary and high school, said his district estimates it would take 20 to 25 minutes for law enforcement to respond to an incident at the school, which has no SRO.

It took just 7.5 minutes for two teenage boys to kill their Columbine classmates in the library, where survivor Evan Todd told the class he was hiding. Twelve students and a teacher died in the 1999 shooting in Littleton, Colorado.

Todd, 35, said he “absolutely” believes there would have been fewer deaths if teachers had been allowed to carry a gun.
But there are plenty of critics.

“I do understand how it can be a tougher issue in our very rural areas,” said Tom Mauser, spokesman for Colorado Ceasefire, a political action committee that advocates for stricter gun laws.
“Teachers should be teachers, not SWAT members.”

Mauser’s 15-year-old son, Daniel Mauser, died at Columbine.
By the end of the course, 21 of the 24 participants met the Colorado Peace Officer Standards and Training requirements in handgun proficiency, the same level for police officers who graduate from the academy.

Staff who receive POST qualification could be considered by their school districts to be security guards in order to legally carry concealed guns on school premises.

FASTER encourages schools to announce that they have armed staff as a deterrent for would-be shooters.

Students themselves are divided.

“I think it would be a very smart thing so you don’t have to wait and fear for your life,” said Alex Easton, 14, from Aurora, Colorado.

Andre Fouque, 16, from Louisville, Colorado, was more skeptical.
“Would police be able to differentiate who had the gun? The teacher would be the first person to get shot. We should leave that to the police,” he said.

FASTER is trying to schedule classes in Indiana and Wyoming, and see if there is enough demand to hold classes in New York state next year.

“The more people talking about it, taking classes and carrying and getting approval from districts, the more it won’t be a scary, ominous thing,” said Katie, the first-grade teacher.