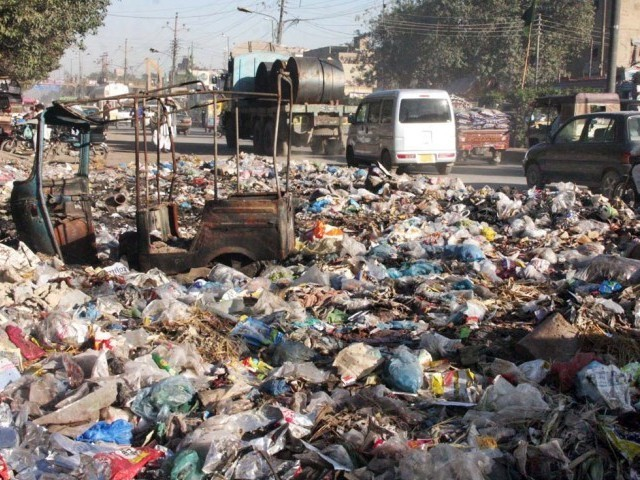 Disposal of solid waste in Karachi is one of the city's major issues that continues unresolved. PHOTO: ONLINE/FILE

KARACHI: The Supreme Court-mandated Judicial Commission on Water and Sanitation ordered on Saturday the authorities concerned to immediately clean the ports of Karachi. The water commission also issued an order to the authorities to stop throwing waste material into the sea and establish treatment plants in the surroundings of all industrial units.

The commission’s head, Justice (retd) Amir Hani Muslim remarked that the cleaner the sea is kept, the better it would be for us. He observed that if poisonous and polluted water is thrown into the sea, marine life will be negatively affected.

The issue of releasing waste material from ports and industries was examined. The commission expressed anger over accumulation of waste and filth on the port and ordered to constitute a working group comprising federal secretaries to supervise the ports’ cleanliness.

Major (retd) Suleman informed the commission that a task force had already been constituted and the fisheries secretary had been appointed its chairperson. Meanwhile, provincial and federal representatives have been made part of the task force.

The task force will examine the waste material from the ports and take action accordingly.

Justice (retd) Muslim commented that he would visit the ports himself tomorrow (Monday). The commission head remarked that nowhere in the world was the condition of a port as bad as it was in Karachi and if the condition didn’t improve, marine life would decline.

He observed that treatment plants in industrial units were necessary.

The commission also inquired as to how the ports could be kept clean on a permanent basis. Justice (retd) Muslim ordered ensuring the blockage of canals to put an end to waste flowing into the port through them.

In its detailed verdict, the commission ordered the relevant institutions not to throw waste material into the sea. The hearing was adjourned till tomorrow (Monday).