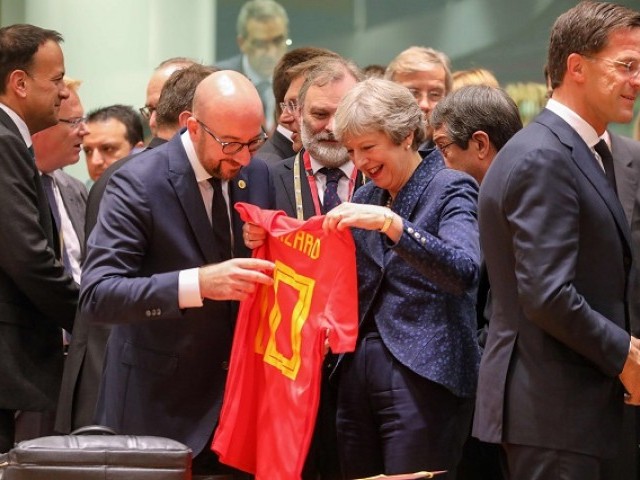 BRUSSELS: Brexit may have caused tensions between Britain and the EU, but Belgian premier Charles Michel broke the ice at a summit on Thursday by giving his British counterpart Theresa May a World Cup football shirt.

The gift of the red and yellow Belgian shirt featured the number 10 most likely a reference to May’s 10 Downing Street residence and the name of Belgium and Chelsea star Eden Hazard.

One of the most tense Brussels summits in years coincides with a Belgium-England match that will decide which team goes top of their group at the tournament in Russia.

The young Belgian prime minister seized the opportunity to lighten the mood as leaders mingled just before the real EU business started.

He fumbled with a black box with red lining, the colours of Belgium, before unveiling the shirt which he then handed to a clearly surprised May.

Britain’s usually reserved premier laughed wholeheartedly at the unexpected gift and then held it up for all to see.

French President Emmanuel Macron and Luxembourg premier Xavier Bettel were also in hysterics at the gift as other leaders looked on.

May is to update the other 27 leaders on Britain’s divorce from the bloc at the start of a summit dinner, which is about the same time as the match starts.

Observers have already dubbed it the Brexit derby.

Earlier, at a pre-summit meeting of the Benelux countries, Michel tweeted a photo of himself, Bettel and Dutch Prime Minister Mark Rutte wearing Belgium national scarves. The three small nations part of the so-called Benelux grouping remain strongly united in most matter tackled at EU summits.

Ireland’s premier Leo Varadkar meanwhile said he would be cheering on Belgium, though he cautioned that a victory for the lowlands country on Thursday night could be a win for both sides.

“I am here in Brussels in Belgium so of course I am going to be cheering for the home team,” said Varadkar, whose country is pushing London to ensure that Brexit does not create a hard border with the British province of Northern Ireland.

“But of course if Belgium wins England will probably get an easier ride in the next round so perhaps it is one of those win-win scenarios.”

In another unusual move, the European Council was set to screen the England-Belgium match on a big screen in its main press conference room.