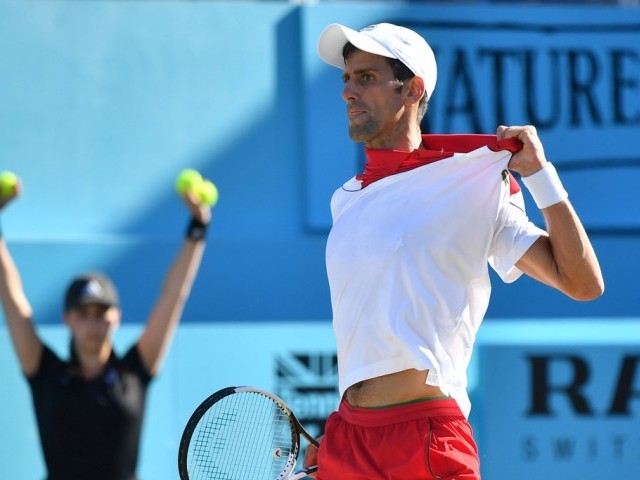 LONDON: Novak Djokovic has come a long way since he reached a career low-point in Miami this year, but he still does not think he is a contender for a fourth Wimbledon title.

The 31-year-old Serb appeared a tormented soul back in March when he lost to Frenchman Benoit Paire in the Miami Masters first round — his third consecutive defeat. Wracked with doubts about his fitness after elbow surgery and suffering a chronic shortage of confidence, he said then it was “impossible” for him to play the kind of tennis that has won him 12 Grand Slam titles.

This week at London’s Queen’s Club it looked rather more like the old Djokovic, even if the former world number one was unable to win his first title for a year. He had a match point against Croatian top seed Marin Cilic on Sunday but ended up losing 5-7 7-6(4) 6-3.

His Queen’s run, plus a quarter-final at the French Open suggest Djokovic, who will climb back into the world’s top 20 on Monday, is ready for a lengthy run at Wimbledon. He was quick to play down his chances though.

“I wouldn’t say I’m a contender, you know, for a trophy or anything like that,” he told reporters. “I have to keep my expectations very low, considering my results, in the last year. But I’m really happy that I’m able to play this way coming up to Wimbledon. Queen’s is as big of a tournament as it gets prior to Wimbledon, and I played the final and almost won it. All in all, I think that the level of my tennis has been as good as it has been the last 12 months.”

Djokovic beat second seed Grigor Dimitrov in the second round at Queen’s with a clinical display, and his movement and defensive skills looked superb against Cilic before he faded slightly in the third set as the relentless Croatian kept up the pressure with his power game.

For a man with 68 titles, a runner-up trophy at Queen’s was nothing to celebrate, but Djokovic at least knows that he is back from the dark place he found himself in in Miami.

“Obviously I’m not going to be ecstatic about losing a final, I’m not feeling that great at the moment,” he said. “But tomorrow things will have a different perspective. Miami was probably the lowest point I have had in terms of state of mind. So it’s quite a significant difference.”