More than 60 patien­ts in Rahim Yar Khan have died since the outbre­ak
By Noor Soomro
Published: June 24, 2018
Tweet Email 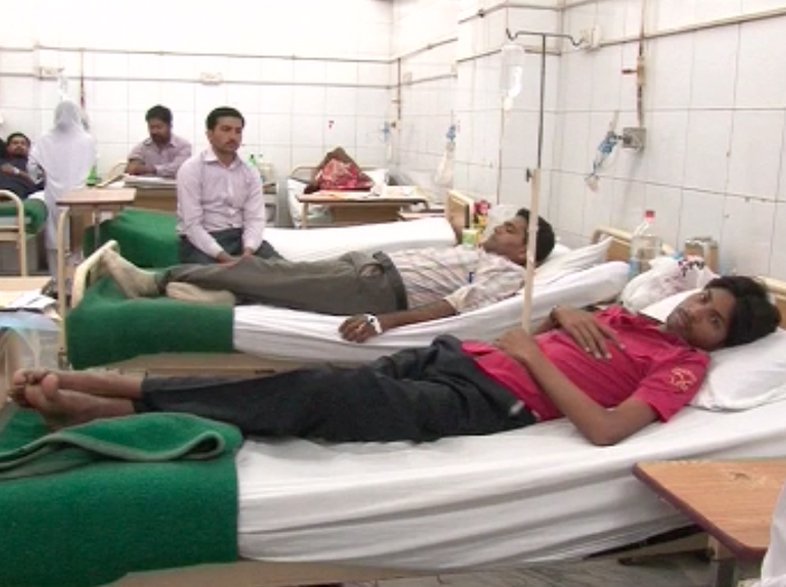 RAHIM YAR KHAN: At least two more people died due to jaundice and gastroenteritis, while 31 others, including 10 minors suffering from such diseases, were admitted to Sheikh Zayed Hospital over the past 24 hours in Rahim Yar Khan.

The total number of casualties since the outbreak has crossed 60, data collected by Express News revealed.

Health officials at Sheikh Zayed Hospital said that 50-year-old Riaz Ahmed and 60-year-old Haji Limo were admitted to the health facility in critical condition after suffering from jaundice and gastro. However, their condition continued to deteriorate and they later died at hospital.

The bodies of the victims were handed over to their families after legal formalities. Meanwhile, 31 people infected with gastro and jaundice were also admitted to the health facility. The patients included 10 minors. The patients were identified as 44-year-old Mumtaz Bibi, 50-year-old Ali Sher, 11-month-old Sana Bibi, seven-year-old Hassan Ali, 40-year-old Tahira Bibi and others.

Jaundice and gastro epidemics hit Rahim Yar Khan earlier in May and resulted in the deaths of more than 60 patients, including children. Currently, the entire district is plagued by the two diseases. Hundreds succumb to these ailments each year and the government has failed to counter the situation effectively. Most government-run hospitals lack adequate facilities and medicines to treat such patients.

Earlier, health experts told Express News that gastroenteritis and jaundice occurs when bacteria cause an infection in the gut. This causes inflammation in the stomach and intestines.

They advised people to consume boiled water and wash their hands before eating meals.

They said the main reason behind digestive disorders is the consumption of substandard food, spicy food and junk food and not getting enough exercise. They said most of the patients suffering from deadly ailments were children belonging to villages and their surrounding areas.

Experts urged citizens to check the quality of food before buying it from shops as using unhygienic and recycled leftover food may cause severe stomach problems.

They pointed out that eating dishes made with leftovers could be major sources of food poisoning, worsening one’s health if reheated or improperly stored.

The items include eggs, potatoes, rice, chicken, and mushrooms are consumed. They said leftovers cannot be kept for several days in the refrigerator as this practice may encourage the growth of bacteria.