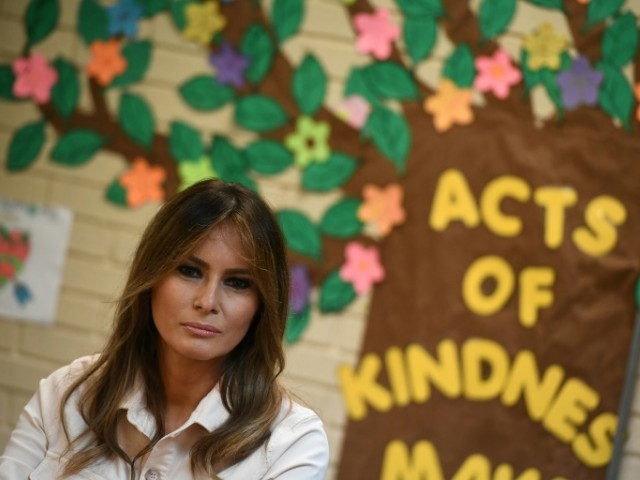 US First Lady Melania Trump said she wanted to see for herself what efforts are being made to resolve the family separation crisis on the US border. PHOTO: AFP

First Lady Melania Trump made a surprise visit to the US-Mexican border on Thursday, as her husband’s administration seeks to quell a firestorm over migrant family separations.

President Donald Trump first announced the trip by his wife, who was touring a non-profit social services center for migrant children, before heading to a customs and border patrol processing center, according to a statement from her office.

The first lady landed in McAllen, Texas under a heavy downpour, her motorcade driving through deep water as it headed for the Upbring New Hope Children’s Shelter, a federally-funded facility that houses around 60 children from Honduras and El Salvador, ages five to 17.

Her visit comes a day after Trump, in a stunning about-face, took executive action to end the practice of separating migrant families at the border, the result of a “zero tolerance” policy towards illegal border crossers.

Images and recordings of wailing children detained in cage-like enclosures has ignited global outrage, and Melania Trump herself had called for a political compromise to end the separations.

“This was 100 percent her idea. She absolutely wanted to come,” Stephanie Grisham, the first lady’s communications director, told reporters travelling with her to Texas.

“She wanted to see everything for herself,” Grisham said. “She supports family reunification. She thinks that it’s important that children stay with their families.”

Despite Trump’s executive order, there was no immediate plan in place to reunite the more than 2,300 children separated from their families since early May.

“The executive order certainly is helping pave the way a little bit, but there’s still a lot to be done,” Grisham said.