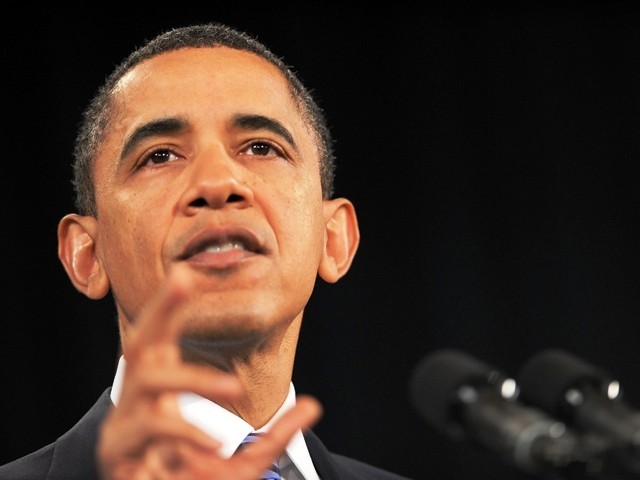 Obama indicates that US would conduct similar Abbottabad raid if another militant is found in Pakistan. PHOTO: AFP

Amid straining Pakistan-US relations, President Barack Obama has said that he would order an operation similar to that which killed al Qaeda kingpin Osama bin Laden if another militant leader was found in Pakistan.

In an interview with BBC, Obama said that the US was mindful of Pakistan’s sovereignty but added that the US could not allow “active plans to come to fruition without us taking some action.”

President Obama had approved the May 2 top-secret commando raid in Abbottabad that had ended the decade-long manhunt for America’s enemy No 1. CIA chief Leon Panetta had said that Pakistan was kept in the dark about the raid because they feared telling Islamabad could have “jeopardised the mission.”

Pakistan’s parliament condemned earlier this month the “unilateral” operation in a special closed-door session and said that Islamabad would “no longer tolerate such actions and a repeat of unilateral measures could have dire consequences for peace and  security in the region and the world”.

Asked if he would do the same if the country discovered another “high-value target” in Pakistan or elsewhere, President Obama said he would “take the shot” since the administration’s job was to “secure the US”.

“We are very respectful of the sovereignty of Pakistan. But we cannot allow someone who is actively planning to kill our people or our allies’ people, we can’t allow those kind of active plans to come to fruition without us taking some action,” said Obama. “I had made no secret. I had said this when I was running for the presidency, that if I had a clear shot at bin Laden, that we’d take it.”

President Obama conceded in his Sunday interview that the Abbottabad raid was a calculated risk – and insisted he would seek closer cooperation with Islamabad.

“It could’ve gone worse,” said Obama. “Part of the reason that I was able to take that calculated risk was an awareness – number one – of how well they prepared, how well we had staked out what the compound was like. It was set back from a large portion of the neighbourhood there. We felt that we could get in and out relatively quickly.

The discovery that Bin Laden had been living in a garrison city embarrassed the Pakistani military and led to renewed suspicions that the al Qaeda godfather had some “support network” in Pakistan – a charge strongly denied by Islamabad.

But President Obama said Pakistan’s cooperation has been key for the success the US has achieved in tracking down and killing terrorists. “We’ve killed more terrorists on Pakistani soil than anywhere else, and that could not have been done without their cooperation.

“But there’s more work to do. And my expectation is that over the coming months, this can be a wake-up call where we start seeing a more effective cooperative relationship.”

The interview was conducted last Thursday at the White House, ahead of Obama’s European tour this week. He flies into Ireland on Monday and will also visit Britain, France and Poland.

US officials have described Bin Laden’s killing as potentially “a game-changing opportunity” in Afghanistan where over 130,000 US-led Nato troops have been battling a deadly Taliban insurgency since 2001.

President Obama said that while the Afghan conflict could not be solved militarily, raising troop levels had put the Taliban “back on its heels” in a way that could facilitate the brokering of a political reconciliation.

“Ultimately it means talking to the Taliban,” he said, adding that the “Taliban would have to cut all ties to al Qaeda, renounce violence and they would have to respect the Afghan constitution”.

Afghan presidential spokesman Waheed Omar welcomed this suggestion, saying it reflected Kabul’s long-held view. “We’re glad that we now have clear words from the president of the United States about it,” Omar told the BBC.

Agencies with additional input from BBC