Imran Khan to face off against Abbasi for NA-53

Imran Khan to face off against Abbasi for NA-53 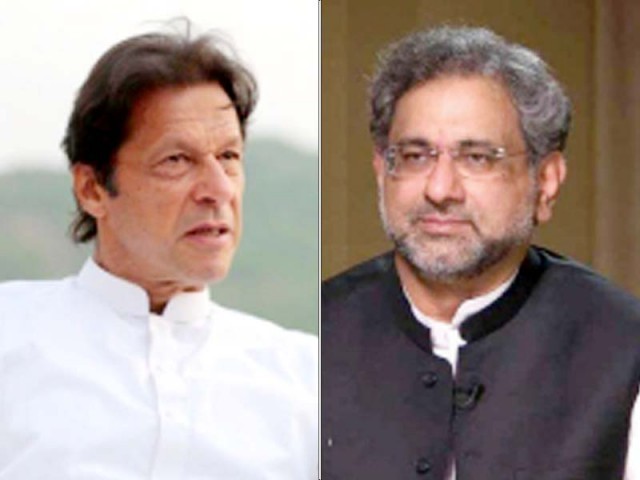 ISLAMABAD: A number of political heavyweights are set to compete against each other in the capital as a total of 136 candidates filed nomination papers with the election authorities for the three national assembly seats up for grabs in the federal capital.

The urban core of Islamabad in NA-53 will witness the juiciest of political clashes with former prime minister Shahid Khaqan Abbasi going up against prime ministerial-hopeful Imran Khan in one of the biggest clashes between arch-enemies Pakistan Muslim League-Nawaz (PML-N) and Pakistan Tehreek-e-Insaf (PTI).

The constituency, which consists of most of urban Islamabad as well as Bhara Kahu, has attracted as many as 70 aspirants, more than half the number of nomination papers filed from the three constituencies of the city. Apart from Imran and Abbasi, other notable candidates to have filed papers from this constituency are Pakistan Peoples Party’s Syed Sabtul Haider Bukhari, the brother of former Senate chairman Nayyar Bukhari.

Up against these giants is Awami Workers Party’s Ammar Rashid.

“Turns out my opponent from PTI in NA-53 will be Imran Khan. This should be fun,” Rashid had tweeted after the PTI announced its first round of tickets.

Some candidates, though, have filed papers for more than one constituency while there are also covering candidates.

Prime amongst them is PTI chief Imran. While NA-53 can be considered his ‘home constituency’, given his palatial Bani Gala mansion falls within it (unlike the last parliamentary seat he had won, NA-56 in Rawalpindi, which he hardly ever visited) means that he will be spending more time with his constituents. However, Imran has also filed papers from NA-35 Bannu, NA-95 Mianwali — his ancestral hometown, and NA-131 Lahore.

For NA-54, a total of 39 candidates have filed papers. The constituency comprises some urban areas and some rural areas of the capital, from Sector G-10 and onwards towards Tarnol as well as Sector I-10.  The main contenders in this constituency are PML-N’s Anjum Aqeel Khan and PTI’s Asad Umar — who returns to the capital for the second time. PPP’s Raja Imran Ashraf — a brother of another former premier Raja Pervaiz Ashraf, and Muttahida Majlis-e-Amal’s (MMA) Mian Muhammad Aslam are also expected to grab their share in the vote bank.

The AWP has thrown a spanner in this mix, fielding women’s rights activist Ismat Shahjahan, from this constituency.

Zubair Farooq Khan, who left the Jamaat-e-Islami a few weeks ago, has also filed papers as an independent candidate to contest from the constituency.

The constituency of NA-52 mostly comprises rural areas of the capital including housing societies located along the Islamabad Expressway all the way up to Rawat on the edge of Rawalpindi. The delimiters, however, seem to have broken the patwar circle of Bani Gala, splitting it in two.

A total of 27 candidates have filed papers for this seat including the likes of former Capital Administration and Development (CADD) minister Tariq Fazal Chaudhry.

The PTI has fielded Khurram Nawaz, while the PPP has put forth Afzal Khokhar. Chaudhry.

While PTI has awarded a ticket to Nawaz, its local leader Chaudhry Ilyas Mehrban — miffed at being ignored — has filed papers for this constituency as well as for NA-53.

His papers were accepted by the returning officer on Tuesday but he was told to submit to party ticket details by June 19 if he wishes to contest the elections with PTI.

On Tuesday, the returning officers also initiated the process of scrutiny of nomination papers, which would continue till June 19.

On the first day, the returning officers accepted papers of Mehrban, Khurram Nawaz, Mian Aslam as well as Malik Noor Awan of PML-N (Awan is the man who had confronted Sheikh Rasheed and demanded his money back at the parliament house a few months ago).

Meanwhile, a PTI candidate from NA-53, Ali Nawaz Awan, withdrew his candidature in favour of Imran. The PTI chief is likely to appear before the returning officer for scrutiny of his papers after Eid.

Capital to geo-tag all polling stations