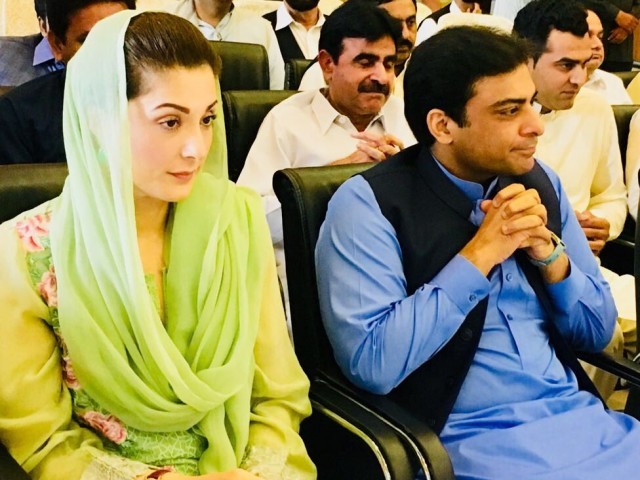 Pakistan Muslim League-Nawaz (PML-N) President Shehbaz Sharif appeared before the party’s parliamentary board for an interview ahead issuance of tickets for the upcoming general elections.

Chaired by PML-N supremo and deposed prime minister Nawaz Sharif, the board interviewed candidates aspiring to be lawmakers.

Taking to social media, PML-N leader Maryam Nawaz expressed gratitude for appearing before the parliamentary board as a “worker and candidate’.

“Felt great to have appeared, alongside Hamza [Shehbaz], before the PML-N parliamentary board for interview as PML-N workers and candidates,” she wrote on Twitter.

Felt great to have appeared, alongside Hamza, before PMLN parliamentary board for interviews as PMLN workers & candidates. PMLN all the way pic.twitter.com/WeQTMGUt6n

In another tweet, the former first daughter embedded a video where the former Punjab chief minister was appraising the board about a visit to Karachi. “The people of Karachi appreciate Nawaz for bringing peace to the city,” he claimed.

A follow up post included a clip of Nawaz, flanked by former prime minister Shahid Khaqan Abbasi and Raja Zafarul Haq, responding to Shehbaz. “PML-N, the only torch bearer, flag bearer of democracy and civilian supremacy,” Maryam claimed in her tweet.

On June 9, Pakistan Tehreek-e-Insaf (PTI) social media team shared an image of party chairman Imran Khan looking over list of candidates to be fronted in general elections. He is much concerned to ensure the tickets are given on merit, said the tweet by Tehreek-e-Insaf. “Finalising process of awarding ticket himself.”

Chairman @ImranKhanPTI is very much concerned to make sure that the tickets are given on sheer merit !

Finalizing the process of awarding tickets himself for #GE2018.#PTICandidates2018 pic.twitter.com/Dka0HIEz0Q