Victim­s had gather­ed to collec­t oil leakin­g from the tanker after the oil tanker caught fire after a blast.
By Manzoor Ali
Published: May 22, 2011
Tweet Email 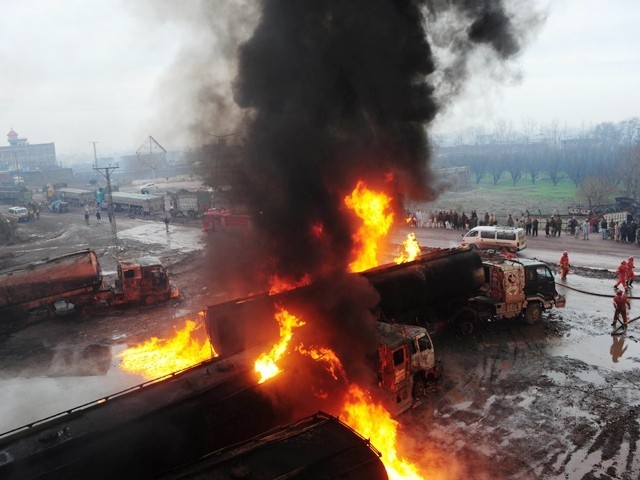 A Taliban bomb attack on a Nato fuel tanker sparked an explosion that killed 15 people ho had rushed to collect petrol leaking from the bombed-out vehicle in a tribal region late on Friday night.

Those killed in the attack in Landikotal sub-division in the Khyber Agency were all civilians, nine of them from the same family, local Political Agent Shafeerullah Wazir said.

Later at least 20 Nato fuel tankers were destroyed at a terminal in the Torkham border region, local sources told The Express Tribune by phone from the area.

Sources said that the deadly attack took place on Bypass Road in the Khawgakhel area of Landikotal sub-division at around 10:30pm on Friday. The tanker caught fire after a small bomb blast and villagers rushed to collect fuel leaking from the wreckage when the blaze was put out.

Suddenly the tanker exploded and at least 15 people, including five young boys who had been collecting oil in their buckets, were burnt to death, sources said. The Khyber Agency provides one of the main land routes to ensure supplies for nearly 13,0000 US-led foreign troops who have been trying to put down a bloody Taliban insurgency in neighbouring Afghanistan for close to a decade now.

The routes through Pakistan bring in 40 per cent of supplies for Nato forces, according to the United States Transportation Command. Of the remainder, 40 per cent come through Afghanistan’s neighbours in the north and 20 per cent by air. Attacks on Nato supply vehicles are common in the Khyber Agency. And local tribesmen often rush to the attack sites to douse fire and to collect fuel oozing from damaged vehicles.

The victims of Saturday’s attack belonged to the Khawagakhel Shinwari tribe, who were collecting fuel. This blast also damaged two schools, a mobile phone company’s tower and two transformers in the area.

Collective funeral prayers for the victims were offered at the Government High School Landikotal. The dead included a nine-year-old child and other victims were aged between 18 and 30, local official Nabi Khan told AFP. Abdullah Azzam Brigade, a militant group affiliated with the outlawed Tehreek-e-Taliban Pakistan, claimed responsibility for both attacks. “It is our jihad against Americans. We want to stop supplies for Nato from our territory,” Abu Musa’ab, their spokesman told Reuters. The attacks came hours after the TTP claimed responsibility for a bomb attack on a US consulate convoy in Peshawar.

In a related development, police in Haripur district of Khyber-Pakhtunkhwa claimed that they had seized an oil tanker carrying thousands of litres of oil stolen from Nato tankers. Police raided a roadside restaurant in Shah Muhammad village on the main Grand Trunk Road and seized the 22-wheeler oil tanker carrying thousands of litres of fuel. Two drivers and a cleaner of the tanker were also detained for questioning. (With additional input from Wires)