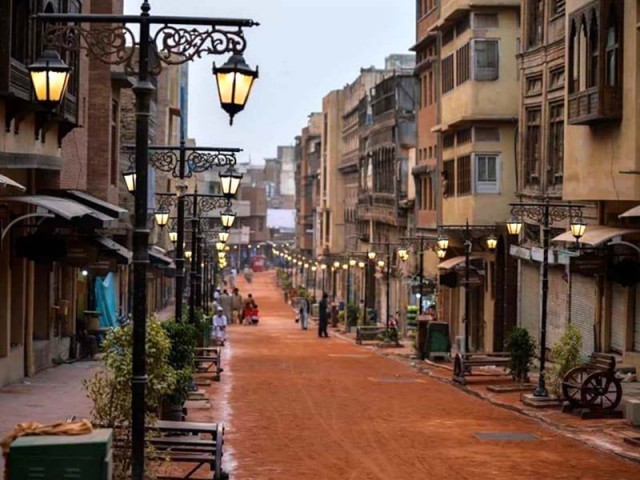 A scene of the revamped heritage trail in Peshawar. PHOTO: EXPRESS

PESHAWAR: The first-ever ‘cultural heritage trail’ built in the province has opened to the public.

The project has been built with the aim of attracting tourists — domestic and foreign — apart from preserving the architectural heritage of the historic city.

The project was built by the Khyber-Pakhtunkhwa (K-P) Directorate of Archaeology and Museums. Having started in December 2017, it converted a 400-metre patch, which passes and connects some of the most historical landmarks in Peshawar, into an urban walking trail.

It was not easy to build the project.

A price tag of Rs300 million would seem too prohibitive for many. Moreover, when work finally started, it overshot its original four-month-long deadline by two months.

Officials explained that the project took longer to complete owing to technical reasons. Prime amongst them was the poor shape of buildings along the trail.

Despite being owned privately, the government renovated them with intricate woodwork. Moreover, cracks and other structural failings were repaired and the buildings were restored to make them look appealing — striking a similarity to the small patch of street created along one wall of the fort in Lahore.

Transported into a different world

While much of the old city is a picture of disrepair and a jumbled mess of hanging wires and gridlocks of traffic in the narrow streets, the heritage trail, though, transports one to a spot which is visibly cleaner.

Before the renovation project got underway, the Ghanta Ghar area was a grey, urban mess. Even the thick, pungent smell from the fish market, which used to  blanket the area, has diminished somewhat after the market was asked to shift to another venue.

A walk through time

The heritage trail begins at the historical Ghanta Ghar. Visitors can then walk through Bazaar-e-Kalan and the Sethian Mohallah — a once upscale neighbourhood of the city which houses palatial wooden havelis built by the Sethis in 1882. It culminates at the archaeological complex of Gor Gathri, which was used by the Italian mercenary general Paolo Avaitable as his residence during the period when Sikhs ruled the city.

The complex also houses Serai Jahandad. which has been converted into an artisan village, a 17th century Hindu temple and a British-built fire brigade with two vintage fire engines dating back to 1912.

The complex also boasts a museum and an excavation site which is over 2,000-years-old.

“The presence of such  rich archaeological and cultural sites making it the most suitable spot for such culture heritage trail which will attract more tourists,” said Nawazuddin, a research officer at the K-P Directorate of Archaeology and Museums.

Talking to The Express Tribune, he hoped that the trail will help attract more tourists and will offer a pleasant environment. While the project had been announced around two years ago, it took the government time to convince various stakeholders such as the Water and Power Development Authority (Wapda) and the Sui Northern Gas Pipeline Limited (SNGPL) to play their role in completing the project.

“This is just pilot project,” revealed Nawazuddin, “In future, the K-P directorate of the archaeology and museums is planning to develop the entire walled city.”