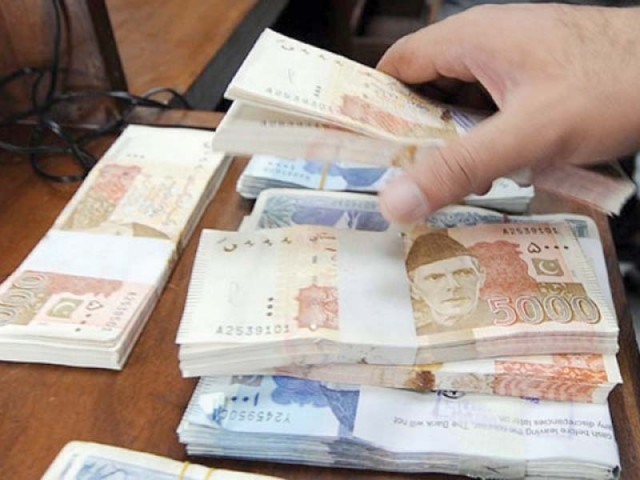 From July through May of the current fiscal year, the FBR has recorded provisional net revenue collection of Rs3.274 trillion PHOTO: EXPRESS

ISLAMABAD: The Federal Board of Revenue (FBR) admitted on Wednesday that it may at best collect Rs3.85 trillion in taxes, indicating massive revenue leakages despite getting substantial bonanza following rupee depreciation, higher regulatory duty and petroleum product prices.

Akhtar chaired a meeting to review performance of the FBR in the current fiscal year 2017-18.

The expected revenue collection of Rs3.85 trillion will be Rs162 billion lower than the original target and Rs84 billion less than the revised target that the PML-N government set hardly a month ago.

Parliament had approved a Rs4.013-trillion tax collection target for the outgoing fiscal year. However, due to persistent shortfall, the just-ended government lowered the target by Rs78 billion to Rs3.935 trillion last month.

The anticipated collection of Rs3.85 trillion will be higher by roughly Rs490 billion or 14.5% than the receipts of previous fiscal year.

In order to boost collection, the FBR had taken additional revenue measures of more than Rs150 billion including the imposition of regulatory duty. Secondly, the positive impact of 10% depreciation of the rupee on tax collection was a minimum Rs55 billion, according to FBR officials.

Thirdly, the nominal gross domestic product (GDP) growth of about 10% (inflation plus real GDP growth) should have yielded an additional Rs336 billion in taxes.

The combined effect of these factors should have been Rs540 billion, which suggests revenue leakages. The higher tax collection on the sale of petroleum products due to increase in their prices was in addition to the above factors.

The FBR told the finance minister that release of Rs33 billion in sales tax refund on the last day of May would hit revenue collection. However, these refunds had been blocked in the past to inflate revenues. The FBR’s internal assessment revealed that even after paying Rs33 billion in refunds, it still owes refunds of Rs300 billion. It has also taken Rs150 billion in advance income tax to meet its quarterly targets, said the officials.

From July through May of the current fiscal year, the FBR has recorded provisional net revenue collection of Rs3.274 trillion.

The finance minister directed the FBR chairman to make all possible efforts to achieve the revenue target this year.

Akhtar stressed the need for improving the tax-to-GDP ratio in order to fund development projects, according to a statement issued by the ministry.

She also sought feedback from the FBR chief on the impact of different amnesty schemes and tax rebates offered by the previous government on revenue collection.

The FBR told the minister that it reluctantly accepted the previous government’s decision to lower the tax on individuals to only 15%. It was of the view that the gap between income tax rates for the association of persons, which is currently 25%, and individual taxpayers may induce people to revoke business partnerships.

The minister stressed the need for upgrading the tax system through the use of technology.

He said for the facilitation of taxpayers, their CNIC had been made the National Tax Number and tax slabs had been reduced to four from seven.

The minister discussed the overall macroeconomic condition and importance of the FBR as a major revenue generation source for government’s operations.