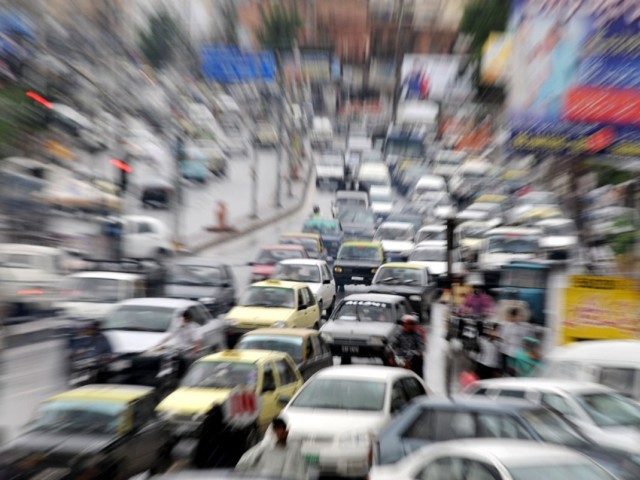 Unfortunately, most drivers are uneducated. There is a lot of unnecessary use of the horn. PHOTO: AGHA MEHROZ/FILE

According to the June-December 2010 measurement by the EPD issued recently, the level of noise in the residential areas of the city now exceeds 60 decibels.

Younas Zahid, the deputy district officer (Environment), said that the district government had seven inspectors who could easily enforce the NEQS. “All we need is help form Traffic Police, especially in densely populated areas,” he said.

Zahid said that the traffic police also need to enforce the Motor Vehicles Ordinance 1965, under which vehicles registered as motorbikes could not be converted into motorcycle-rickshaws.  “Such rickshaws are quite common,” he added. He said that traffic wardens routinely fined people for not wearing helmets, but did not pay any attention to noisy vehicles.

Asif Zafar Cheema, the City Division, superintendent of police, said that the education wing of traffic police was working towards spreading awareness of the issue.

“Buses and rickshaws are the main source of noise pollution. Unfortunately, most drivers are uneducated. There is a lot of unnecessary use of the horn,” he said.

He said roads in front of hospitals and schools were no-horn areas. “A lot of drivers get fined for violating the rule.”

He said commercial and residential areas in the Walled City were so close together, it was difficult to enforce the law fairly.

“The situation is similar in several old localities,” he added.A copy of the master plan received from the DDO’s office, he said, showed Mughal Park on GT Road as an industrial area. Cheema pointed out that the area was a residential locality instead.

According to the EPD officials, private power generation has a major role in raising noise pollution in the city.

Samson Younas, who works at Centre Point near Kalma Chowk, said that the noise and vibration caused by the commercial power generators was really ‘annoying.’“The entire building seems to be vibrating with it. The noise is worse than the heat. But we cannot do anything about it for it has been declared a commercial area,” he said.