Raisan­i says BAP has been formed to bring all people under one umbrel­la
By Our Correspondent
Published: June 4, 2018
Tweet Email 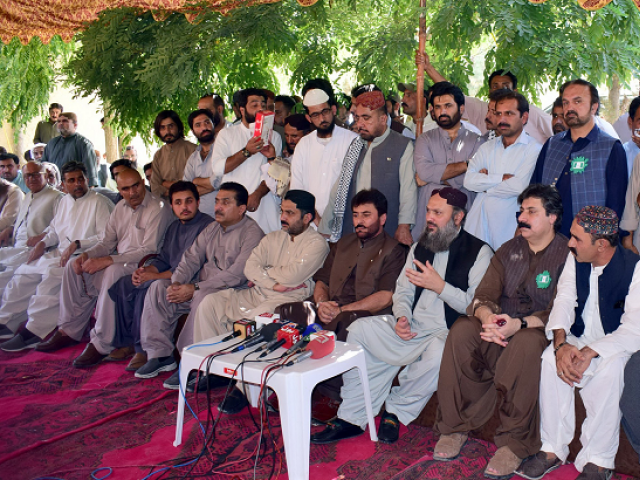 QUETTA: In another major development on the political front of the province, the Balochistan Muttahida Mahaz (BMM) has merged with the Balochistan Awami Party (BAP).
BMM Chairman Nawabzada Siraj Raisani, PML-N leader and Khuzdar District Chairman Agha Shakil Durrani and JUI-F leader Noor Ahmed Bangulzai along with the party leaders and members joined BAP during a press conference on Sunday.

BAP President Jam Kamal, General Secretary Manzoor Kakar, Senator Naseebullah Bazai, Mir Amanullah Notezai, Prince Ahmed and others welcomed the merger of BMM with BAP.
The BAP president said, “Today’s merger of BMM has further strengthened our party because we want one and all to unite under one umbrella in order to strive together for Balochistan’s rights.”
He said, “We have formed a provincial-based political force so that no one from outside the province can impose his decisions on us.”
General Secretary Kakar said, “For 70 years, the Centre has kept our province deprived of all development projects and basic facilities.

“The structure today we are seeing in Quetta was built during the British era as nationalists and central political parties didn’t do anything for the welfare of the people of Balochistan.”
Siraj Raisani said, “BAP has been formed to unite all the people of Balochistan, casting aside ethnic differences, which is the main reason we decided to merge with BAP.”