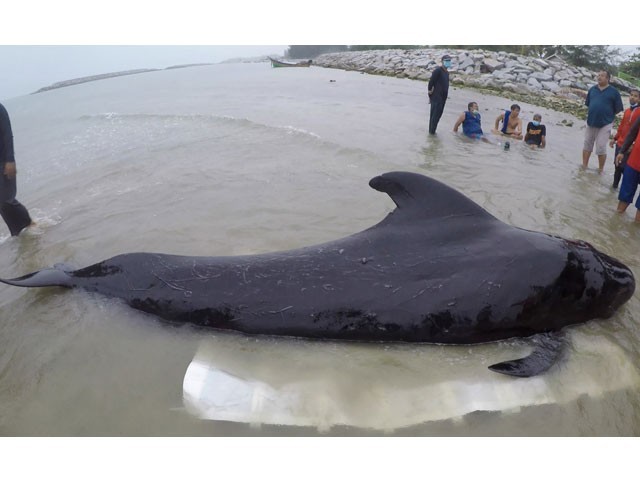 This handout picture from ThaiWhales a private whale conservation group, taken on May 28, 2018 and released on June 2, 2018 shows ThaiWhales volunteers and governmment marine veterinarians from Department of Marine and Coastal Resources rescuing a sick male pilot whale at sea in the coastal area of southern Thailand near the Malaysian border. PHOTO: AFP

BANGKOK: A whale has died in southern Thailand after swallowing more than 80 plastic bags, officials said, ending an attempted rescue that failed to nurse the mammal back to health.

Thailand is one of the world’s largest consumers of plastic bags, which kill hundreds of marine creatures living near the country’s popular beaches each year.

The small male pilot whale became the latest victim after it was found barely alive in a canal near the border with Malaysia, the Department of Marine and Coastal Resources said on their Facebook page Saturday.

A veterinary team tried “to help stabilise its illness but finally the whale died” on Friday afternoon, the post said.

An autopsy revealed 80 plastic bags weighing up to eight kilogrammes (18 pounds) in the creature’s stomach, the department added.

Photos accompanying the post showed a group of people using buoys to keep the whale afloat after it was first spotted on Monday and an umbrella to shield it from the scorching sun.

The whale vomited up five bags during the rescue attempt before it died, the department said.

Thon Thamrongnawasawat, a marine biologist and lecturer at Kasetsart University, said the bags had made it impossible for the whale to eat any nutritional food.

Hundreds of whales wash up dead on New Zealand beach

“If you have 80 plastic bags in your stomach, you die,” he said.

“I feel sorry for the animal that didn’t do anything wrong but has to bear the brunt of human actions,” one Twitter user wrote in Thai.

Thousands at funeral for Gaza volunteer killed on Israel border