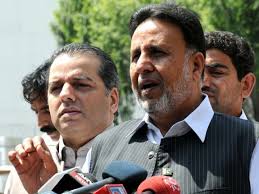 The party continued to swing back and forth over nominations for Punjab’s interim chief minister slot for a third consecutive day. This indecisiveness was called “political immaturity” by opponents of the party. On Friday, the party had another embarrassing situation as two party leaders tasked with announcing PTI’s fresh nominations for the interim post ended up giving contradictory statements and rejecting each other’s claims.

PTI made fresh nominations after Nasir Durrani refused the nomination. Durrani was nominated by the party on Thursday.

Mian Mehmoodur Rasheed told The Express Tribune that Jan was on the list of PTI nominations he handed over and discussed with the government on Friday. He added that Jan’s name was forwarded by PTI Chairman Imran Khan himself.

Rasheed informed that he held meetings on Friday with Punjab Assembly Speaker Muhammad Iqbal Khan and Law Minister Rana Sanaullah. “The government has also proposed some new names, while PTI submitted its candidate list,” he said.

The opposition leader said that he was scheduled to meet with Punjab Chief Minister Shehbaz Sharif on Sunday (tomorrow) to hold final consultations with him over the nominations. “In today’s meetings with senior PML-N leaders, it was decided that both sides would cut their lists down to only one name. The final two names, one each from the government and the opposition, will be deliberated upon on Sunday,” he said.

As soon as the PTI announced the nomination of Jan, people started posting their views and made it a top trend on Twitter. They criticised PTI’s decisionmaking process and noted the many controversies Jan has been involved in.

They condemned the nomination due to Jan’s controversial and rigid views on religious, political, and social issues. Recently, he was in the news for his offensive remarks about Malala Yousufzai.

According to a senior PTI leader, the party is likely to withdraw names of Jan, Amir, and Izhar. “PTI’s final nomination for the slot would be Dr Rizvi.”

He said that Imran Khan has directed Rasheed to attend an important meeting in this regard in Bani Gala on Saturday (today). “Rasheed will hold final consultation with the Punjab CM on Sunday on the name of Dr Hasan Askari,” he added.