Kishanganga decision likely in a fortnight

Kishanganga decision likely in a fortnight 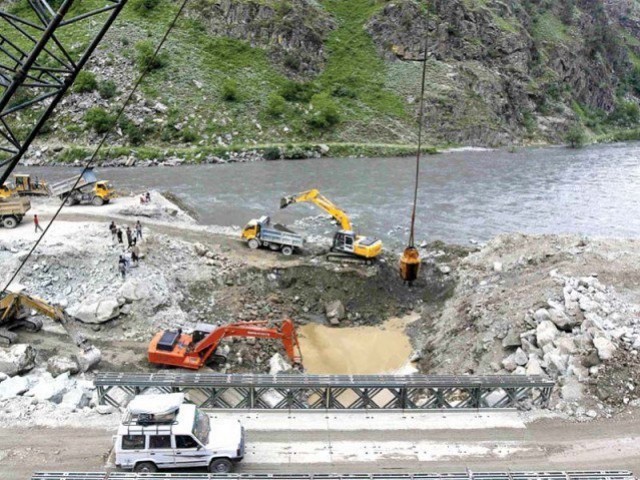 A private vehicle crosses a bridge as excavators are used at the dam site of Kishanganga power project in Gurez, 160 km north of Srinagar. PHOTO: REUTERS

ISLAMABAD .: Despite the World Bank’s cold-shoulder treatment, Pakistan is still hopeful of a positive outcome on the Kishanganga and Ratle hydroelectric projects.

Sources told The Express Tribune that the World Bank’s board of director would take up the matter and announce its final decision in the next couple of weeks, adding that Pakistan wanted a decision on ending the impasse, but the bank wanted its board of directors for the decision.

A senior government official in the Foreign Office maintained that the bank officials regretted the delay and informally blamed Indians for misleading them.

This official even contended that although the dam was already built, if experts concluded that it was built against provisions of the water treaty, India would be asked to make changes in its design and pay up reparations.

According to him, the bank had been told that Pakistan was disappointed by its inaction and it appeared that the bank was more interested in watching out for the Indian interest and Pakistani point of view was being ignored without any justification

“The bank was also informed to find a solution to end the impasse created by no one else but the bank itself and that India was acting in an irresponsible manner.

Pakistan, he said, had been patient but its patience was being construed as weakness. However, the attorney-general declined to comment about the outcome of their meeting with World Bank officials.

Attorney-General Ashtar Ausaf Ali led a delegation to the World Bank, for a two-day meeting, to discuss Kishanganga and Ratle hydroelectric projects under the Indus Waters Treaty.

Detailed discussions were held with the CEO of the Bank, Kristalina Georgiva, and her legal and technical teams, who were directed by the World Bank president (who was not in the country), to address Pakistan’s concerns.

Meanwhile, the Foreign Office issued a statement, according to which the attorney-general regretted Indian attempts to make the Indus Waters Treaty dysfunctional. It also bemoaned Kishanganga dam’s inauguration by India in flagrant disregard of its commitments to the World Bank and in utter violation of the Treaty.

Stressing that waters of River Indus and its tributaries were lifeline for more than 200 million people of Pakistan, the Foreign Office stated that it was not just water issue, but a human rights issue.

The delegation led by the attorney-general was directly instructed by the prime minister to effectively highlight the serious implications of Indian intransigence and its disregard for international law, especially the Indus Waters Treaty, the statement said.

The attorney-general, it stated, reminded the bank of its obligations and emphasised upon the need to abide by its commitments. The delegation also stressed on the need for revisiting Kishanganga project’s design and impact. He also urged the US government to actively support the bank in resolving the Kishanganga and Ratle hydropower projects and within the ambit of the Treaty.

According to the statement, the World Bank president had assured the attorney-general and the government of Pakistan that the bank would make efforts to resolve both issues within the parameters of the Indus Waters Treaty.

Pakistan, it stated, believed that Kishangaga project’s inauguration without resolving the dispute was a violation of the Indus Waters Treaty.

Despite several rounds of talks and World Bank’s mediation, India continued with the construction of the project. India’s intransigence has made the Treaty dysfunctional.

Pakistan urged the bank to raise this violation of the IWT with India and bring an end to the impasse.

Pakistan reiterated that as the custodian of the Treaty, the World Bank should urge India to address Pakistan’s reservations on Kishenganga hydroelectric project.

The Kishanganga project was started in 2007 but on May 17, 2010, Pakistan moved for international arbitration against India under the provisions of the Indus Waters Treaty.

No state wants to be safe haven for terrorists: CJP