Gen Asad Durran­i and AS Dulat's book is schedu­led to launch this week in New Delhi
By News Desk
Published: May 25, 2018
Tweet Email 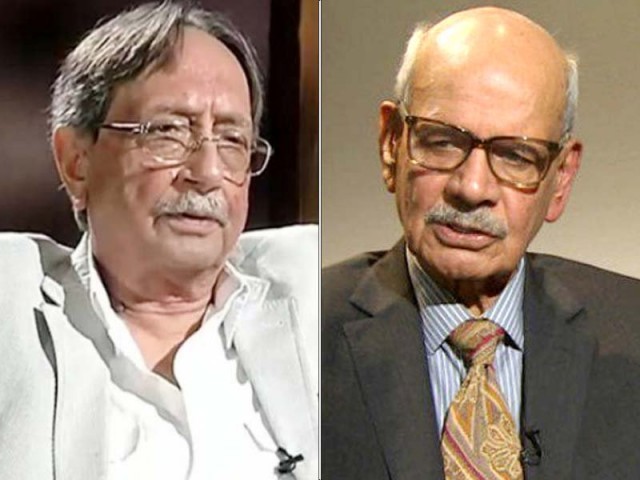 Former Senate chairman Raza Rabbani on Friday said that if a politician or a civilian had agreed to co-author a book with an Indian, they would have been charged with treason.

Rabbani also urged Defense Minister Khurram Dastgir to reply on the matter. “The book of two ex-intelligence chiefs of Pakistan and India has been published. It is astonishing that despite the deeply strenuous relations, this book is being launched,” added the former Senate chairman.

“There would’ve been ruckus and religious decrees against politicians and civilians had they moved in this direction, they would’ve been booked for treason as a result of their ‘revelations’.”

Durrani’s book was under discussion in the Parliament when Rabbani questioned prior ‘permissions’. “Did General Durrani take permission from his institute before authoring such a book?” he questioned. “This isn’t a trivial issue, relations between the two countries are going through a rough patch.”

However, Durrani is unlikely to attend the launch of his book as the Indian government has not issued him a visa.

During an interview, AS Dulat suggested that the Indian government invite Pakistan Army Chief General Qamar Javed Bajwa to restart the stalled talks between the two countries.

“Roll out that red carpet, invite General Bajwa and see what happens,” he stated.

Both authors described the people-to-people contact between both countries as a “low hanging fruit” that could be used to resume cricket ties as well. Durrani said, “The agreement to have a joint anti-terror mechanism would have been a great achievement for both. Alas, that was not to be.”

Speaking about India’s National Security Adviser Ajit Doval, the former ISI chief says in the book, “The upshot is he is just doing what his boss wants to be done, maybe more muscularly and more vocally.”