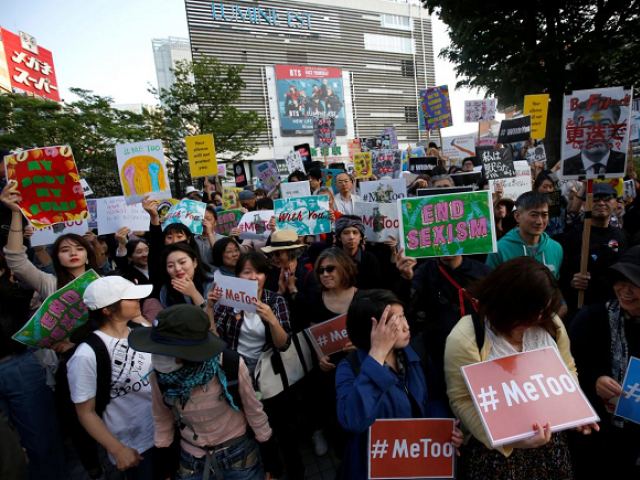 TOKYO: The resignation of Japan’s top finance bureaucrat after accusations that he sexually harassed female journalists has sparked heated debate and protests in a country where women have traditionally been afraid to speak out for fear of being blamed.

Below are comments by five prominent women interviewed by Reuters on the topic.

MIZUHO FUKUSHIMA, MEMBER OF PARLIAMENT
Fukushima, 62, a former lawyer, feminist activist and member of parliament’s upper house, is deputy head of the small opposition Social Democratic Party. She has a history of representing and advising victims of sexual harassment.

“Sexual harassment is an extremely serious matter that violates women’s human rights. It robs them of work, and damages them psychologically,” she said. “Although they are the victims, they are treated like troublemakers.”

“I was angry and shocked by the (Fukuda) incident. I felt we had regressed 30 years. At one point, awareness of sexual harassment had spread and … there had been progress but when I heard of this woman’s accusations, I felt angry and shocked at how little has changed, how hard it is to speak out, how prevalent such terrible sexual harassment is in the political world and how awful the working environment is for women.”

“I want to address the root causes of sexual harassment.”

YUKO ANDO, TV NEWS ANCHOR AND JOURNALIST
Ando, 59, studied abroad and graduated from Tokyo’s Sophia University, where she is now pursuing a doctorate while heading Fuji TV’s evening news. She covered the Gulf War in 1991.

“When I went into this business, I was a 21-year-old college student … and worked part-time,” she said. “For the first time in my life, I was told ‘go report on politicians. When I asked why, I was told ‘Because politicians like young women.’ No kidding … It was an era where this wasn’t seen as a problem.”

Women’s awareness “is in the process of changing. I think they have put up with it, thinking that if they spoke out, they’d be slandered and libeled,” Ando said.

“I think that now not only women in media but also ordinary women will raise their voices,” she said. “The question is, when ordinary people in a weak position without any organization behind them are sexually harassed and speak out, who will protect them.”

Noda, 57, has said she intends to challenge Prime Minister Shinzo Abe for leadership of his ruling party in September. Elected in 1993 to the lower house after an unsuccessful bid three years earlier, she gave birth to a disabled son at age 50 after conceiving via donor eggs and in vitro fertilization. She has been bashed on social media for “wasting taxpayers’ money” from the state-funded system on his medical care.

She said changes were coming in the way harassment is handled. “Expect it. Because I am the cabinet minister. We have found through case studies that there are lots of gaps (in the system for dealing with harassment). Even if we cannot fix all of them, for now, I want to announce what I can during the current session of parliament,” which ends in June, she said.

“It is certain that those fed up with male leadership are increasing,” she said of the possibility that Japan could elect a woman as prime minister. “What is important is that when the time comes that the people want change … when they feel we cannot go on the same way, then we women will be able to play a part.”

CHIZUKO UENO, SOCIOLOGIST
Chizuko Ueno, 69, director of the non-profit Women’s Action Network and professor emeritus at the University of Tokyo, is one of Japan’s most influential women’s studies scholars.

“Our past response to each sexual harassment case has been a kind of whack-a-mole. As long as the hotbed of the problem stays, it will keep emerging here and there.

After #MeToo, Britain investigates sexual harassment of women at work

“Having said that, it’s very welcome that the atmosphere in society is changing toward not tolerating sexual harassment. We now have more sexual harassment lawsuits, plaintiffs are more likely to win than before, and compensation is getting bigger. People are learning that sexual harassment costs them.”

SHIORI ITO, FREELANCE JOURNALIST
Ito, 29, went public last year with accusations of rape by a well-known Japanese journalist after prosecutors declined to bring charges. The journalist has denied the allegations.

Ito, who was working as an intern for Reuters during the time she says the rape occurred, is seeking compensation from the journalist in a civil lawsuit. In March, she helped launch a “#WeToo Japan” movement to mobilize victims and critics of sexual harassment.

“The backlash I received was people calling me different names such as slut, prostitute, honey trap, North Korean child. Some people said I’m just doing this for propaganda … that this is political.”

Asked if Japan was at a turning point: “Finally, I think people started realizing, OK, this is about human rights … so it is changing. And we can’t miss this chance.”