In soaring heat, farmers are paying the price

In soaring heat, farmers are paying the price 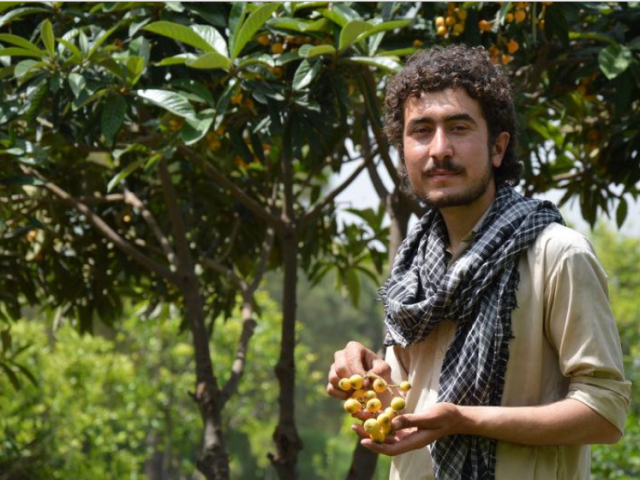 MARDAN: Adil Khan’s hopes for a good harvest are fading again this year as he inspects his orchard of apricot and loquat trees in Khyber-Pakhtunkhwa.

Usually, fruit in the five-acre family orchard is ready to pick only by the last week of May. But this year, and in other recent years since 2013, much of the harvest has ripened by mid-April – nearly a month ahead of schedule.

With less time to grow, the fruit is half its normal size – and his income is shrinking too, the 34-year-old farmer told the Thomson Reuters Foundation.

“We are really at loss,” he said, pulling down a branch of tiny apricots. “The fruits have ripened in the middle of their growth.”

Pakistan’s farmers are struggling to bring in a harvest as the country’s weather patterns change as a result of climate change. Warm spring weather, now coming as early as March, has led to fruit trees flowering before bees arrive to pollinate them, for instance, or fruit and vegetables ripening at unusual times.

Another farmer, Muntazir Khan, has seen his harvest of beets and tomatoes fall by 40% this year on his 3-acre family farm in Taxila, about 35 kms (22 miles) from Islamabad, despite planting seeds on time and applying the right fertiliser.

That huge drop, due the crops ripening in late March instead of late April, “means nearly no profits”, he said.

“I am scarcely able to recover the expenditures with such low yields,” Khan said, clutching a handful of freshly harvested beets.

The problem, farmers agree, is that spring is getting shorter, hotter and earlier.

“We are clearly noticing that springs are not cool anymore and are increasingly becoming warmer, which is not good for our seasonal vegetable crops,” Adil Khan said.

His fruit requires cool weather from January to March to grow well, he said, but warmer days in February and March are now disrupting old patterns.

“We have clearly observed through our weather monitoring stations all through Pakistan that springtime has not only warmed by more than 3 degrees Celsius in recent years but also shrunk from 45 days to less than 10 days over last two decades,” said Ghulam Rasul, director general of the Pakistan Meteorological Department.

“This is in no way a good omen for springtime vegetable and fruit farmers,” he told the Thomson Reuters Foundation.

He said at least 34 meteorological stations broke temperature records for March this year in most parts of the country, with temperatures sometimes more than 10 degrees Celsius above the monthly long-term average between 1981 and 2010.

Nausherwan Nawab, a senior science officer at a vegetable research center of the state-run National Agricultural Research Council, said lower spring temperatures of 20 to 25 degrees Celsius a decade ago resulted in slow and steady ripening of spring fruits and vegetables.

“But such is not the case anymore,” said Khuda Bakhsh, an agro-economy professor at the COMSATS Institute of Information Technology in Pakistan’s Punjab province.

One consequence of the decline in production is soaring vegetable and fruit imports from China, India, Afghanistan, Thailand and New Zealand, said Yusuf Zafar, chairman of the National Agriculture Research Council, an arm of Pakistan’s Ministry of National Food Security and Research.

“Over last five to seven years, production of citrus and other fruits and vegetables has shown a notable declining trend”, with fruit harvests down an estimated 25-28 percent and vegetables down 22 percent, he said.

Aslam Pakhali, chair of the All Pakistan Fruit and Vegetable Exporter and Importers Association, said nearly 30% of the vegetables and fruits consumed in Pakistan are now imported.

Pakistan used to export surplus vegetables and fruit prior to 2010, he said.

Imports have increased over the last five years “as low production of these farm items is insufficient to meet domestic needs”, he said in a telephone interview.

To adapt to the changing conditions, farmers need access to hardy new fruit and vegetable varieties that can grow over a shorter season, Bakhsh said.

“The role of agricultural scientists and extension department officials in this regard is of unprecedented significance,” he said, with farmers needing help to learn how to adopt and grow new heat-resistant and short-season crops.

Meanwhile, some farmers – like Muntazir Khan – are adjusting to changing spring weather by cutting out some of their vegetable production altogether and turning to things like raising chickens.

Lack of resources makes such shifts difficult for many, however. Khan would like to set up a commercial half-acre poultry farm, but that will happen only “whenever I have enough financial resources”, he said.