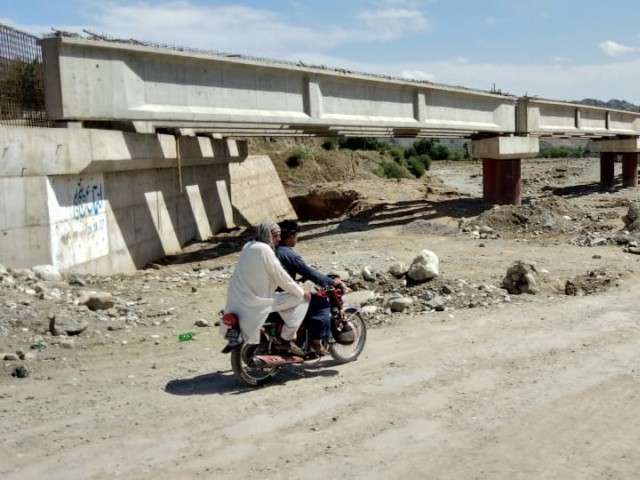 SHABQADAR: Considered a lifeline for locals — particularly for those involved in trade and mining in the area, a broken main Mohmand-Bajaur Expressway has been hurting their cause. To make matters worse, work on the expressway has stalled owing to lack of funds.

The situation worsened after the recent rains which created a flood-like situation in Lakkaro, closing down the road for a day, hampering traffic travelling to and from Bajaur, Dir, Chitral and Mohmand.

The political administration of Mohmand had requested the State Ministry of States and Frontier Regions (SAFRON) to release funds to the contractor of the expressway, the Frontier Works Organisation (FWO), so that the remaining 30 per cent of work on the project could be completed.

In a letter, a copy of which is available with The Express Tribune, the Mohmand Political Administration urged the Federally Administered Tribal Areas (Fata) additional secretary to release Rs600 million from the allocated funds to the FWO.

In the letter, the political administration highlighted the importance of the expressway for traffic plying between Mohmand-Bajaur and Dir-Chitral. Moreover, it said that the expressway provided an alternate and economical route to Afghanistan. So much so that after the inauguration of the 800-metre-long Nahakki tunnel in September 2017, it had become the preferred route for residents of Bajaur Agency, Upper Dir and even Chitral to travel to Peshawar. The Ghallanai-Mohammad Ghat road lies at the heart of the greater alignment with the Peshawar-Bajaur Road.

The political administration stated that on any given day, around 1,500 vehicles travel down from Bajaur to Peshawar through the Nahakki Tunnel.

Of these vehicles, at least 290 were fully loaded commercial transport coaches while 10 were fully loaded Daewoo busses. The rest included goods transportation vehicles of various sizes. The total quantum doubles when traffic from Ghallanai to Bajaur is added up.

But as funds dried up and work halted, including on building the remaining portion of the road and to install three bridges, heavy rains over the weekend saw a flood-like situation on the under-development section of the road north of Lakkaro Tehsil. It cut the agency off from the rest of the country for around eight hours.

As many as 300 vehicles were stuck from 3 pm to 11 pm on either side of the uninstalled bridges at Shwa Parsh Masood in Safi Tehsil and at another point on the Ghazi Beg Bridge works.

In the absence of the bridge, vehicles are forced to cross through a dried up storm drain when the weather is dry.

“The total cost of this project stands at Rs3.7 billion. It has an allocation of Rs600 million in the current fiscal year. It is requested that the allocated amount be released so that payments can be made to FWO (the executing department) at the earliest,” read the letter.